Because the Garmin Instinct Solar can draw power from the sun, you may never need to charge it. 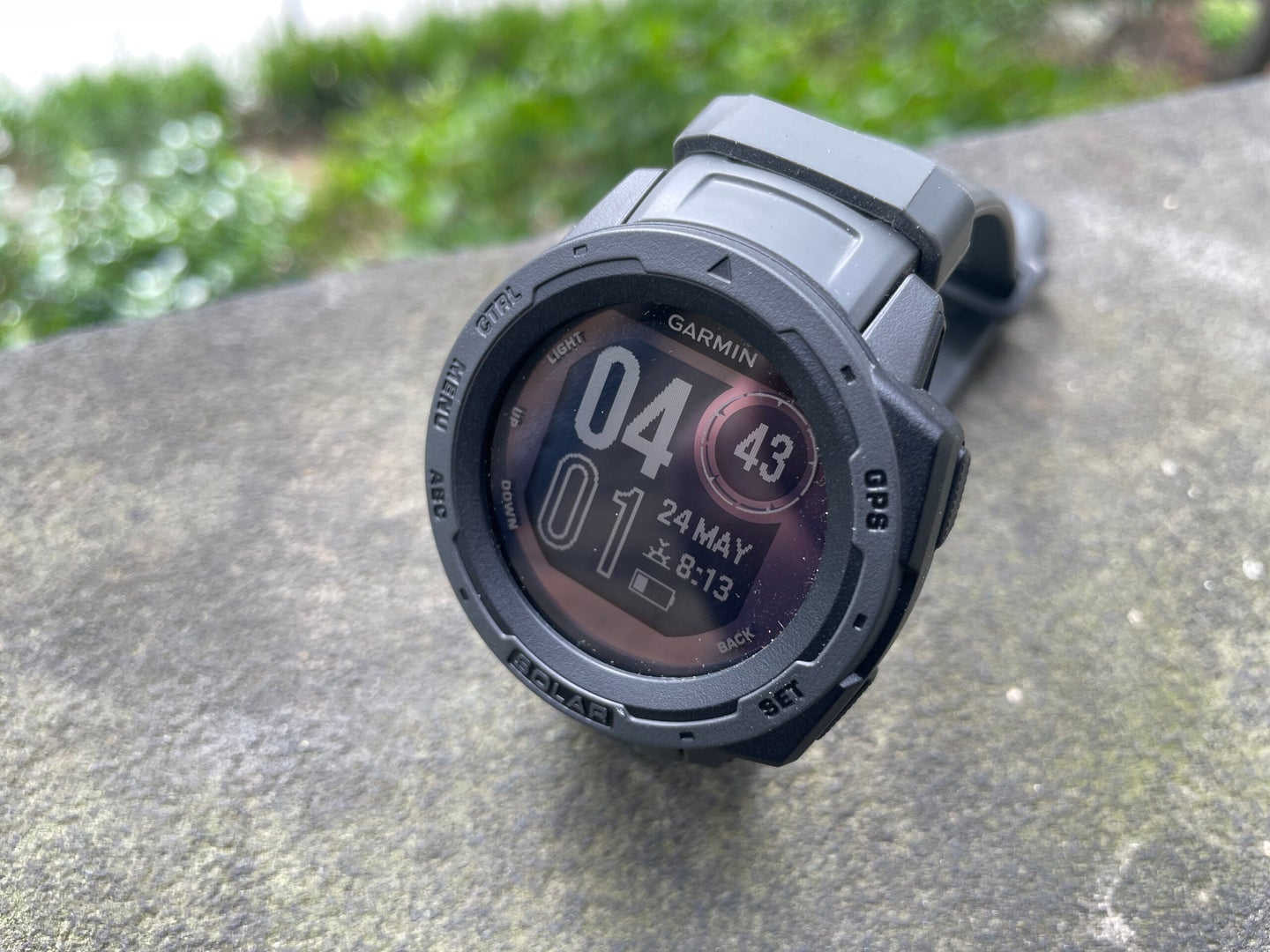 The Garmin Instinct Solar smartwatch’s looks won’t inspire poets. It also won’t complement your evening wear at a fancy dinner party. That’s the point. With its hefty fiber-reinforced polymer case, recessed glass face, and chunky buttons, the watch feels like a muscular rebuke of the sleek, minimalist fitness trackers produced by other companies. This burly fitness watch is built for adventure.

Released in 2018, the original Garmin Instinct watch was a popular, durable fitness tracker with a deep feature well. The first Garmin Instinct watch offered fitness tracking, health monitoring, exercise challenges, as well as outdoor GPS and mapping. The Instinct Solar watch, as its name suggests, adds the company’s innovative solar charging tech, which allows it to run almost endlessly without the need for a wired charger. Still, its appeal goes well beyond its longevity. In addition to advanced sports and fitness tracking, the Garmin Instinct Solar includes advanced navigation features and typical smartwatch Bluetooth connectivity with an iPhone or Android device.

I was surprised by how comfortable the Garmin Instinct Solar watch felt on my wrist. Despite the fitness watch’s relatively large size—45 mm in diameter, 15.3 mm thick, but only 53 grams—I barely noticed it after a week of use. I wore it on jogs, to the gym, while packing to move to a new apartment, and on the job as a professional cameraman. The latter is particularly important to me; I’m already lugging all sorts of camera gear, I don’t want something hanging off my wrist that distracts me when I’m trying to shoot. Plus, I never knew previously how much of a workout I was getting on set; it was nice to learn that my job gives me a passable excuse to skip the gym.

The basic silicone watch band packaged with the Garmin Instinct Solar fit my average-sized wrist comfortably, but it trapped a lot of sweat. Thankfully, the Garmin watch uses quick-release pins to make it easy to swap out bands and there are plenty of replacement options to choose from. Garmin and other third-party manufacturers offer them in a variety of materials like leather, nylon, and plastic. There are plenty of color options as well. I even found people making and selling compatible custom watch bands on Etsy.

You can buy the Garmin Instinct Solar in five different colors; the review sample was a dark gray called “Graphite.” The face has button names printed in white on the edge of the watch’s glass. Secondary functions appear molded into the bezel and painted black. My only complaint is that the black lettering on the dark grey plastic is nearly impossible to read without holding the watch up close to my eyes. However, the buttons are large enough to find without searching. Once I had memorized the basic user interface, navigating functions became much faster—and I didn’t need to squint.

I grew up in the ’80s with old Casio solar watches that wasted about 30 percent of the face’s real estate on photon-gathering panels. Whatever buttons the watch had were crammed in like passengers on a crowded subway car. Garmin avoids this problem by collecting solar energy through what the company calls “Power Glass,” which sits behind a scratch-resistant Corning Gorilla shield (you can read more about how it works here). The clever design has a matte finish that you won’t even notice after a few days.

While the Garmin Instinct Solar isn’t ugly, it’s also not shy about its rugged nature. It pairs with a fancy suit or dress like wine pairs with Pop Rocks. But since when does that matter in a sports watch? This exercise tool is built tough to withstand your workout or a no-holds-barred afternoon on the field. It laughs at sweat, wipes clean after hiking through the mud, and won’t run out of power when you decide to run a super marathon through the desert—or spend a long weekend working in your garden. Even after a few weeks of rigorous testing, our review unit didn’t look any worse for wear.

Setting Up this Garmin Smartwatch

Setting up the Garmin Instinct Solar smartwatch was simple and fast. While the watch comes with a partial charge out of the box, you’ll still need to fully charge it by plugging it into a power source via the included multi-pin USB cable. I had to supply my own outlet adapter. The charging cable physically plugs into the watch instead of relying on the familiar magnetic wireless charging found on other popular smartwatches like the Apple Watch. The direct connection isn’t as convenient, but it is faster.

Once charged, I was surprised at how easily the watch guided me through set-up. Clear prompts lead me step-by-step through the process, which took roughly 10 minutes. The free Garmin Connect app for your iOS or Android phone and then make sure Bluetooth is activated. The watch syncs up quickly. Once linked, the Garmin Instinct Solar asks for biometric data, including your height, weight, and stride length (I had to double-check all three) in order to better establish exercise routines, set goals, and track activities.

The Garmin Instinct Solar watch delivers a lot of information via its monochrome memory-in-pixel display. It lacks some of the fancy visual tricks found on watches with full-color screens, but that’s almost a relief. The display is clean, bold, sharp, and you can read important information at a glance without having to interrupt your activity. It has an adjustable backlight for use at night. Garmin also makes it easy to customize the watch face to fit your tastes. I like a very simple arrangement with time and date that I can read quickly. But, if you hike, maybe you want to see sun-up and sunset (vampires will like that, too, I’d imagine). Those counting steps can create a face that includes that information.

While simplicity is a nice benefit, maximizing battery life provides the primary motivation for the monochrome face. Garmin says that the watch never needs to be charged off its cord if it’s used for at least three hours in direct sunlight each day. I certainly found this to be true; the only times I needed to charge it were when I was stuck inside at the editing bay.

Switching between active apps and widgets is easy using the Garmin’s up/down buttons to change screens. However, the “instinct” in the Instinct Solar’s name doesn’t quite refer to its user interface, which isn’t as intuitive as it could be. It sometimes took me a while to find the function I wanted and many of the widgets contain their own set of submenus. There were definitely times when searching for a particular setting was almost as much of a workout as any of the activities I had planned. But with use, the system made more sense and I eventually found it fairly quick to navigate the watch’s interface. Expect at least a slight learning curve.

This GPS fitness watch tracks a wide range of athletic activities—like biking, paddling, hiking, walking, hunting, and rafting—and it even has a triathlon mode. It offers a few different running options, including outdoor running, indoor track running, and trail running to meet whatever challenges you set for yourself. Not just focused on monitoring its own power reserves, the Garmin Instinct Solar’s sensors also work together to optimize what Garmin calls your “Body Battery.” Wellness monitoring includes heart rate, stress, sleep, and blood oxygen levels, and there’s even a Virtual Trainer to help you develop exercise routines that fit your lifestyle. Ultimately, it’s at least one step beyond what you’d expect from a do-it-all smartwatch like the Apple Watch.

Like all Garmin smartwatches, the Instinct Solar syncs with the Garmin Connect app. If you own multiple Garmin watches, you can select the one you want active in the app with the touch of a button. The app shines when it’s tracking your activities. My wife and I went for a bike ride around town and the watch told me not only my heart rate, how many calories I burned, and other biometric stats, but it also gave me an extremely accurate map of where we rode. It measured elevation and ambient temperature as well—information that would be extremely useful if I were training for bike races.

I really enjoyed “TracBack” routing, which kept track of me as I walked through a large, urban park. It generated a map that helped me get back to where I started, and then made it easy to retrace my steps with my wife to show her some of the sites I found. No surprise that Garmin produces a watch with excellent GPS, and the watch connects to GPS, Galileo, and GLONASS systems to cover you anywhere on the planet.

The Garmin Connect app opened the door to an online community and, once connected, I found people to challenge me, cheer on my successes, and provide helpful fitness tips. It’s easy to link up with friends. I found one of mine from college, and we spent two days seeing who could wrack up more steps. The friendly competition provided great motivation no matter how lazy I felt.

Other online tools include something called Garmin Coach, which provides customizable training via videos made by noted running experts. You can set race goals—whether you’re a beginner or experienced runner—as well as personalized training plans. It’s easy to access these online features, and I was impressed by Garmin’s app-based user interface.

Keep your phone in your pocket

The Garmin Instinct Solar watch connected seamlessly to my iPhone 12 Mini, which I loved being able to leave in my back pocket most of the time. I set the watch to vibrate whenever a new message came in and, with a flick of my finger, I could access Spotify to advance through songs on my playlist. This was particularly useful when I was on a shoot and my hands were full. In short, it handled the day-to-day smartwatch stuff well, which isn’t always a given with some of the more fitness-oriented wearables. That’s especially true with devices that don’t offer any screen at all, like the Fitbit Flex 2 or the Amazon Halo.

Who should buy the Garmin Instinct Solar?

Fitness trackers have become essential gear for athletes, people concerned with health, or anyone living an active lifestyle. The Garmin Instinct Solar watch builds on the original Instinct watch and provides a host of features at a price in line with feature-rich smartwatches (though a little less than fashion-forward flagship models). Sure, it’s far more practical than stylish, but its ability to operate endlessly with no need for a charging cable will more than make up for that with adventurous types. Campers and hikers, or people who work outside for a living, can rejoice at the freedom they feel with this Garmin watch while pausing every once in a while to check a notification or change a song.