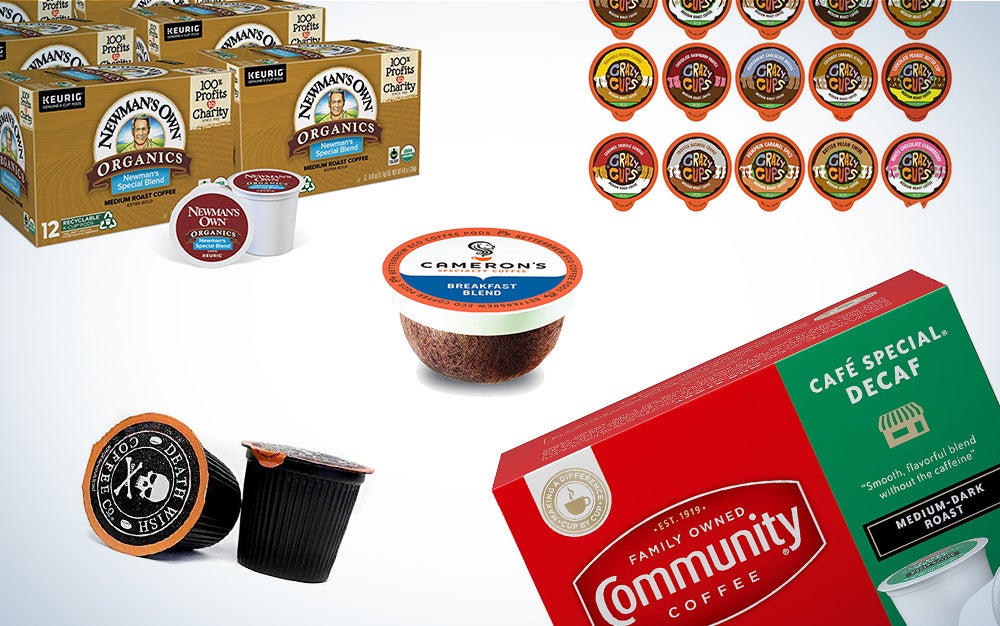 Not all K cups are made the same. If you're in a rush or on the go, you don't have to sacrifice taste for convenience.

When it comes to making coffee, it doesn’t get easier than slamming a K cup into a Keurig machine and letting that little pod work its instant-brewing magic. That convenience is key when you’re trying to resist the allure of pricy cafe brew or nasty-but-easy gas station swill. But just because K cups are easier than traditional coffee makers doesn’t mean they can’t be delicious. The best K cup coffee matches your particular tastes and habits without costing more than your monthly Hulu subscription for each mug.

How we selected the best K cup coffee

For this test, we scoured the options while considering the most crucial variables, including price-per-cup, roast, flavor, and even how sustainable those little pods are. We consulted with a small crew of die-hard coffee drinkers who, after they were done lecturing us about the superiority of drips and pour-overs, helped shed some light on what to look for. We also consulted with a few long-time office workers who have tried every K cup their corporate overlords agreed to order them. The resulting list includes a variety of flavors and roasts to meet just about any preference.

Why it made the cut: Truly cheap coffee tastes like an ashtray. This affordable option provides much fuller flavor for not much more cash.

Like we said above, K Cups should only be part of your balanced coffee consumption. If you’re only looking to supplement your fancy java, you don’t want something that strikes a balance between taste and cost.

Newman’s Own offers four different flavors, including the middle-of-the-road special blend (which also comes in decaf), a darker French roast with a richer flavor, and a lighter Sunrise blend. Even if you have two at a time in order to get your day started off, it will still be cheaper than even gas station coffee.

Plus, the cups are made from number 5 polypropylene so they’re relatively simple to recycle if you have curbside pickup. Just be sure to empty the coffee (preferably into a compost pile), then peel off the lid, and recycle the cup.

Why it made the cut: With double the caffeine in each cup, this strong brew doesn’t take much to get you going in the morning or before that 3 p.m. meeting.

A regular cup of coffee will get you roughly 100 mg of caffeine, but each Death Wish K Cup Coffee has around 200 mg for a two-times increase. That’s roughly the same amount of caffeine as two 12-ounce red bulls. It’s no joke.

Despite its scary name and intense stimulant content, Death Wish coffee comes in both dark and medium roast depending on your personal taste. The medium roast is a newer release brought on by customer requests.

Both blends have a strong flavor profile that stands up nicely to cream or creamer, but you can keep it black for maximum wake-up effects. Recently, the company worked with NASA in order to create a freeze-dried version of this peppy beverage to send to the international space station.

Why it made the cut: Even without the caffeine, this medium-dark blend has a smooth, powerful flavor to help satisfy the routine.

Coffee isn’t always about caffeine. Sometimes it’s about the morning ritual or maybe you just like the taste. These totally decaffeinated pods provide a medium to dark taste that has very noticeable hints of chocolate in it. The company also says it has notes of caramel, but in our tests, the chocolatey flavor overshadowed that.

If you like the taste of this specific brew, the company also sells a caffeinated version, so you can keep both on-hand and even mix them together for a half-caf when you want just a little boost.

Why it made the cut: With more than a dozen flavors, you get a ton of choice for your cup.

Die-hard coffee snobs turn up their noses at flavored coffees. That’s especially true for flavors like Death By Chocolate or Bananas Foster Flambe. Luckily, we’re not all coffee snobs and sometimes a fun flavor is just what you want. All of the flavors are zero-calorie and caffeine-free. Each pod comes with roughly 30 percent more coffee than a typical K Cup coffee to make the flavor extra bold. That means it will stand up to ice if you want to have it cold instead of hot.

Not all the flavors are winners, but that’s why we’re recommending the variety pack first. Give the flavors a go, then pick the one you like best to order more. You’ll likely want to stick to the familiar flavors. The Vanilla Pumpkin Spice is a safe bet. White Chocolate Strawberry may sit in the cabinet for a while.

Why it made the cut: There’s no plastic cup component to go with these coffee pods, which makes nearly the whole package compostable.

While recyclable plastic is fine, these compostable cups cut down on overall waste considerably. Compost loves coffee because of its nitrogen content, which helps the pile thrive. Each one of these pods includes a paper lid (as opposed to foil), a compostable structural ring to keep it all together, and a filter that will quickly deteriorate into your pile. It’s a very strict upgrade over the plastic stuff.

That’s all moot if the coffee isn’t good though. Luckily, that’s not the case here. The company offers a wide range of flavors from light to dark roasts and into the flavored coffee territory. The breakfast blend is solid if you’re looking for an easy flavor to start with.

Note that you will have to keep these pods in an airtight container since there’s no plastic cup to keep it sealed in. That gives you the added bonus of wafting coffee air every time you open the receptacle.

Things to consider before buying a K cup coffee

Before you grab a random pod, there are a few things to consider. After all, these little buckets of ground-up beans will set the tone for the whole day. It’s worth doing a little research before committing.

For some people, morning coffee is more about the taste and the ritual than it is the shot of caffeine to the dome. A typical cup of coffee will net you just shy of 100 grams of caffeine, but that obviously varies between brands and flavors. Some offer to double that, while others nix the stimulants completely. Be sure you know what you’re getting in terms of caffeine content before you let that hot water flow.

When someone says the phrase “K cups,” it evokes the iconic Keurig machines, which really kickstarted the pod coffee enthusiasm. There are other machines out there, though, so be sure to check and make sure the cups you buy work with the machine you own. If you don’t see the information directly on the box, check the company’s official site. Sometimes it will list the compatible machines.

While opting for a K Cup will almost always be cheaper than opting for takeout coffee, the prices do vary. Buying in large quantities typically saves you some cash on each one. Be sure to check that unit price before you buy. Even a little saving can add up after a long period of time and lots of cups.

We recommend you keep K Cups as a part of your coffee consumption since they’re not the most environmentally friendly way to enjoy a cup of brew. Most K Cups are recyclable, but you can up the ante by opting for those that are compostable. Compost actually loves coffee because it’s high in nitrogen and it will help your pile thrive just like you after your third dose of caffeine before your 11 a.m. meeting.

Q: Which K Cup has the least caffeine?

Any K Cup marketed as “decaf” will typically offer very little to no caffeine. You can check the box to see if it lists the amount of caffeine per cup (the average is around 100) or check the manufacturer’s website if you want to be sure.

Q: Which K Cup has the most caffeine?

At roughly 200 mg of caffeine per cup, the Death Wish coffee on this list is definitely among the top. There are others out there with soaring caffeine levels, but we recommend moderating your stimulant intake no matter how boring that staff meeting is going to be.

Q: Can you use the same K Cup twice?

You can, sorta. But you shouldn’t. They’re only meant for one-time use. There’s already a hole in the lid, which means you may end up making a mess when you try to run it through again. The coffee also likely won’t taste good the second time around since it will be watered down and, frankly, kinda gross.

K Cup Coffee can’t replace a carefully crafted cup of coffee made by a hip barista at a cool cafe. They can, however, provide a quick, easy cup of coffee that provides a shot of flavor and caffeine into your morning with little hassle.