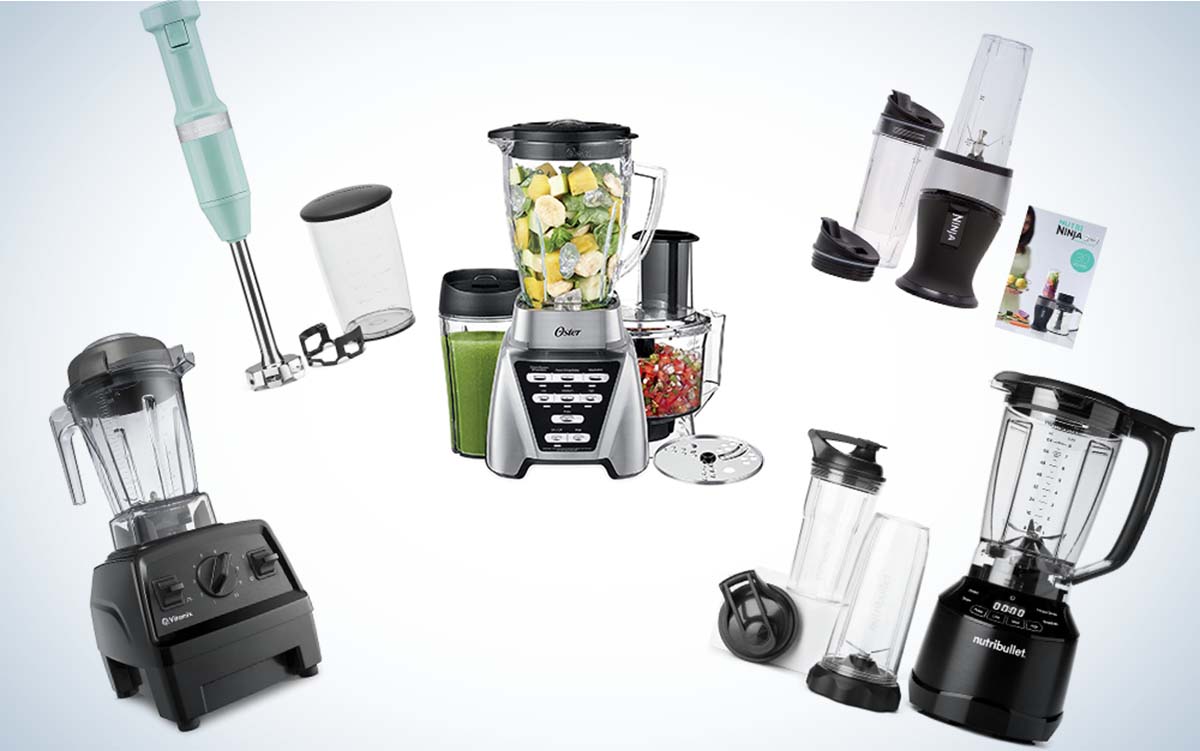 Mix your way to delicious shakes, smoothies, and other concoctions with one of the best blenders.

A kitchen isn’t quite complete without a blender. But a weak blender can be worse than no blender at all. These powerful choppers, pulverizers, and (yes) blenders blast through food in seconds. A blender’s power, design, and extra features will determine how well it breaks up ice or handles frozen fruit. The best blenders will have features that make efficient work of the foods you blend most, whether that’s smoothies and protein drinks or soups and ice cream.

Presets, smart features, and extra cups are only a few of the extras that come with today’s blenders. Not everyone needs a premium blender with 17 speeds and the ability to make nut butters. The best blenders are made in different types to fit everything from professional to single-serving needs.

How we chose the best blenders

I’ve researched and tested kitchen products for years. My search for the best blenders began with evaluating performance consistency and reliability. Next, I considered the quality of the construction and materials. For example, glass and stainless steel last longer than plastic.

What to consider when buying the best blenders

There’s more to blenders than meets the eye. You could purchase the most popular blender on the internet, but it might not be the best fit for your needs. For example, soup lovers might benefit from an immersion blender rather than a traditional countertop blender. Smoothie makers and frozen beverage-havers will benefit from a powerful high-speed blender that can demolish ice with ease. There are plenty of considerations to make when choosing a good blender.

One of the four blender types may be more efficient, cost-effective, or productive for you based on how you want to use it. The four types include:

Blenders have anywhere from 1 to 17 speeds, though most people really need only three. A pulse setting is also helpful, as it allows you to manually turn the motor on and off to break up the suction in thick mixes.

Touchscreen controls are easy to keep clean because of their flat, even surfaces. However, they’re not the easiest to use, as you may have to scroll through several screens to access certain functions. Buttons and manual dials are easier to use, but they often don’t provide the same range of functions as a touchscreen.

The blender’s pitcher shape affects how well the food rotates in the blender. Grooves and indentations direct the food. Wide pitcher openings make it easier to add ingredients.

As far as materials, plastic and glass are the two pitcher options. Plastic is lighter and less likely than glass to break if dropped. However, it can also absorb odors and discolor. Glass may break more easily and be heavy, but it tends to last longer and resist odors and discoloration.

Most household blenders feature 2-8 blades set at different angles in a wing, star, or X-shape. However, the number of blades depends on the blender type and model. For example, immersion blenders feature a smaller, wing-shaped blade at the bottom. More blades equal more contact between the food and the blade. Additionally, the blade-style affects how the blender performs. X-style blades are good for food cutting and chopping. Wing-style blades are better suited for crushing ice.

Countertop blenders can range anywhere from 500-750 watts. However, the wattage can dip as low as 300 watts, and go all the way up to 1,500 watts. The higher the wattage, the more powerful the blender, and the easier it will be to cut through frozen fruits and veggies.

With so many blenders on the market—and even more with tons of features—picking a new blender can be a challenge. We’ve scoured the internet to find the best blenders that crush the competition as easily as they can demolish ice. Some of these best blenders can even heat up soup. One of these should make all of your milkshake or margarita-making dreams come true.

Why it made the cut: The E310 has the power and durability of more expensive Vitamix blenders, but simple controls keep the price more reasonable, making it our choice for the best blender.

The Vitamix E310 Explorian Blender brings quality to the kitchen. Vitamix is well-known for its industrial-strength blenders, and the E310 meets their high standards. This pick has impressive power and high-quality materials and construction, but it doesn’t have some of the premium features available on other models, such as a touchscreen and vacuum sealing. That keeps the price slightly lower on this model with all of the power you’d expect from a Vitamix blender.

A manual dial controls the 10 speeds, and a switch operates the pulse feature when it’s time to loosen thick mixes. The stainless-steel blades actually create heat, which allows users to create warm soups in about six minutes. The 48-ounce pitcher holds enough for two or three people, so it might not work for large families or groups.

Why it made the cut: The Oster acts as a kitchen multitasker with a food processor attachment that works just as well as the blender.

The Oster Blender Pro 1200’s 50-ounce glass pitcher, 24-ounce cup, and 40-ounce food processor container and blade provide versatile options for smoothies, food processing, and blending. Both the blender and food processor blades work in both directions to reduce suction. The blender blade is designed to push food downward to keep food moving into the blades for smoother results.

The Pro 1200 offers seven speeds, including pulse and three presets for the most popular foods—smoothies, salsa, and milkshakes. And all of the parts, except for the base, are dishwasher safe.

Why it made the cut: This model’s manual pulse that powers through shakes and smoothies combined with its personal-size cups with to-go lids make it our pick for the best personal blender.

This Ninja blender can easily blend protein shakes and smoothies every day without slowing down. It comes with two 16-ounce cups and two to-go lids. You can blend directly into the cups, attach a lid, and you’re good to roll with a blend-and-go meal or snack.

This model has the power to break up frozen ingredients even though it’s equipped with only a single speed. However, that single speed only activates when you press on the cup; there is no continuous power. This design works well for smoothies and protein shakes, especially when using frozen fruit, the pulsing action prevents food from over-thickening and creating suction. However, without a continuous speed option, it doesn’t work for much else.

Why it made the cut: The KitchenAid’s performance and quality stand out as it blends through all kinds of mixes, rising as our choice for the best immersion blender.

This KitchenAid blender comes with a three-cup container that doubles as a measuring cup. There’s also a pan guard included for use when mixing in nonstick cookware or other delicate containers. At cleaning time, the arm detaches from the base and goes in the dishwasher, along with the measuring cup and pan guard. The only part of this immersion blender that is not dishwasher safe is the motor unit. A variable speed button provides some speed adjustability. However, it’s fairly difficult to control. Most people find that the blender is either on or off with very little variability in between.

Why it made the cut: From smoothies to soup, the Hurom Hexa High-Speed Blender tackles it all, making it our pick for the best powerful blender.

Hurom has earned props for manufacturing some of the best juicers on the market, allowing you to make your own healthy concoctions from the comfort of your home. The first high-speed blender from the company lives up to the hype of its countertop siblings. Unlike most blenders on the market, which have plenty of presets built-in, our powerful pick includes a manual dial that adjusts the blending speed from 16,000 to 30,000 revolutions per minute, or RPM. If you’d like to take the guesswork out of blending, there are three speed presets—smoothie, ice crush, and soup—along with a pulse switch. Thanks to its 1,600-watt motor, ice cubes, frozen fruit, and nuts don’t stand a chance against this high-powered blender. However, the power translates to a noisy blender, with some reviews noting its loudness.

If safety is a priority, the power shuts off when the motor reaches its heat limit. If the container is lifted off the base while in usage, the blender immediately stops.

Why it made the cut: The NutriBullet has serious power and functions as a personal and conventional blender, providing excellent bang for your buck.

Four preprogrammed buttons help you through the most common blender mixes. Plus, you get three speeds and a pulse button too. Overall, this model provides the power of a premium blender with the versatility and price of a conventional model. It may cost more than a Walmart blender, but you get far more functionality and power with the NutriBullet.

Glass or plastic comes down to the blender’s container. Glass containers last longer, resist odors, and stain less often. However, they’re heavier and can potentially break if dropped. Plastic containers are typically less expensive, lighter weight, and resist drops better. Their downfall is that they can absorb odors and stain more easily.

Watts can be deceiving when it comes to blenders because power isn’t the only factor that determines efficiency. Blade and container design also affect how well foods move throughout the blender. However, most blenders average 300 to 600 watts, even though some on our list run at 1,200-1,500 watts. For general-purpose use, 400 watts works for smoothies, shakes, and frozen foods. If you’re blending ice every day, a blender with more than 600 watts will work faster and last longer.

Q: What is the most durable blender on the market?

Durability comes down to the quality of the construction and materials. Vitamix and Ninja both have a reputation for their blender quality. Their models are known for lasting for years and providing top-of-the-line performance.

Q: What is the most reliable blender brand?

Vitamix, NutriBullet, and Ninja are household blender brands, and most likely the ones that are top-of-mind for consumers. And one of the reasons they are go-to brands is because they are typically reliable. However, while brand power is important, we would argue that purchasing a blender suited for your needs is better than relying on a name alone. And, no matter what brand you turn to, see what kind of warranty they offer. A warranty sets expectations of what the customer is getting into upon purchase, and a good warranty can save you money—and frustration—in case anything goes awry.

Final thoughts on the best blenders

We chose the Vitamix E310 Explorian Blender as the best overall for the power and durability it provides. The simplicity of the controls and speeds makes it easy to run too. However, if versatility and budget are more important, the NutriBullet Touch Combo Blender functions as a personal and conventional blender for far less dough than the Vitamix. There’s much to be grateful for when it comes to a good blender. Without it, we wouldn’t be able to make chilly boozy slushes, slurpable smoothies, and scrumptious soups.