Understanding why some struggle more than others could help us find solutions. 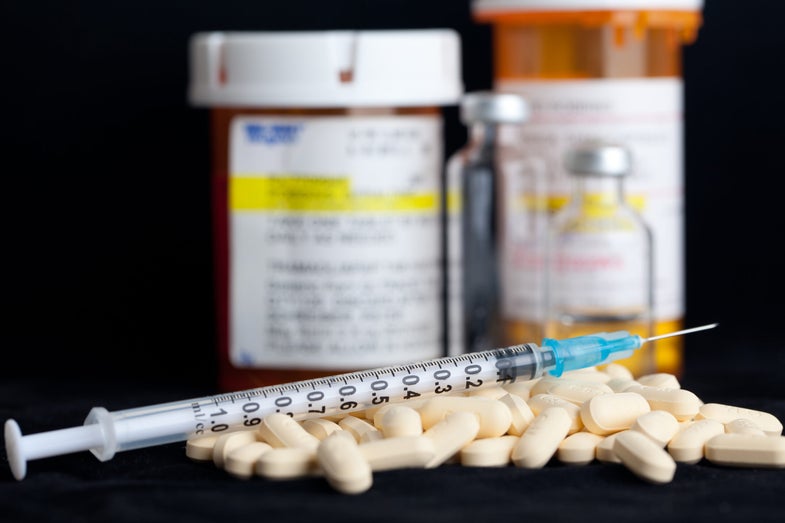 Millions of Americans struggle with substance abuse and tens of thousands die each year, according to the American Society of Addiction Medicine. Though treating addiction has become a vast (and at times abusive) industry, the underlying causes of drug or alcohol dependency—and how to successfully treat these debilitating conditions—are still poorly understood by science. Now, researchers think they’ve found the germ of an answer in our genetic past.

In this study, researchers from several institutions including Oxford University and the National-Kapodistrian University of Athens looked at an ancient retrovirus that’s present in the genes of only some humans, and found that HK2, the retrovirus, is present in people who use injection drugs in both Greece and Scotland at a higher rate than in the general population. They believe that their results offer evidence for a physical cause of addiction, although they don’t currently know the exact mechanism by which it works.

Human endogenous retroviruses are ancient retrovirus DNA that hangs around in our genes, passed from generation to generation as part of our genetic code. Mostly, they seem to just hang around as junk DNA, not doing much, but studies have posited a link between some HERVs and autoimmune disorders and other conditions, including some cancers. However, a formal link between a HERV and a human disease state has not been established. This research is a step toward demonstrating that an unusual HK2 integration present in just five to 10 percent of the population might actually contribute to addiction. In this integration, genetic information from the HK2 retrovirus is present in a gene involved in regulating your brain’s dopamine levels. Dopamine is a neurotransmitter that signals pleasure and reward in your brain—good feelings, when felt in small amounts, but associated with addiction when the brain becomes dependent on higher and higher levels provided by drug use.

To do their study, researchers first looked at two different groups of people who use injection drugs. Both groups had gotten a disease as a result of their injection drug use. In Greece, the cohort studied had been infected with HIV, and in Scotland, the cohort had been infected with Hepatitis C. The researchers used a basic genetic screening technique to analyze how many people had the rare HK2 integration. They also looked at people with the same infections who had contracted the diseases in other ways, and looked for the HK2 integration.

The drug users studied were between 2 and 3 times more likely than the control population to have the HK2 integration. Although there’s no proof of a causal relationship between HK2’s integration into the RASGRF2 gene and addiction, there is a “strong” correlation, says study author Gkikas Magiorkinis. They used the two populations, whose data can’t be compared, because “we wanted our study to be as robust as possible. The replication from two cohorts suggests that the finding is highly unlikely to be random,” he wrote in an email to Popular Science.

In future work, they hope to actually study the molecular mechanisms of action by which the presence of HK2 affects dopamine and demonstrate how the retrovirus DNA might influence drug abuse. But that won’t be simple work. How molecules provoke dopamine release has only recently been isolated in mice, who can be euthanized and studied during experiments. Studying the human brain in action requires less invasive measures, which makes it much more difficult. But “technologies like the functional MRI have made a real difference,” Magiorkinis says.

And of course, this isn’t the first study to address the underlying causes of addiction or potential treatment options. From erasing the memories of addiction to figuring out what part of the brain gets you to stop doing stuff to developing non-addictive pharmacological treatments, scientists are on it. But these findings may point the way toward new treatments and, in and of themselves, lead to more understanding of substance abuse.

“There has never been sufficient evidence of these [endogenous retroviruses] causing disease in humans,” says Magiorkinis. But “by providing a strong link between a genetic trait and [addiction-related] behavior,” he says, this study offers further proof that stigmatizing people who struggle with addiction is wrong, and that how we understand addiction is flawed.

Whether finding a physical cause for addiction will actually be able to help reduce stigma “depends a lot on other social and political factors,” says addiction expert Samuel Friedman. Friedman, who is the director of the Institute of Infectious Disease Research, a nonprofit, was not involved with the current research but has worked with Magiorkinis on other projects.

So, it’s not as if conclusive evidence of causation would immediately lead to a dramatic change in how we treat people with addiction. But if understanding the molecular mechanisms by which HK2 influences dopamine would allow us to develop better treatments for substance use dependence, he says, that would in itself be a positive.

As everyone who experiences addiction knows, it’s about more than just the science. “I don’t know what I think about the concept of addiction itself,” Friedman says. “A lot of the discussion around it is socially harmful.” Unpacking what’s actually going on might help change some of those harmful ideas about addiction being the result of lack of self-control, but it’s not the whole, complex picture.