Researchers Make Artificial Cells That Can Replicate Themselves

To better understand how life might have started on Earth 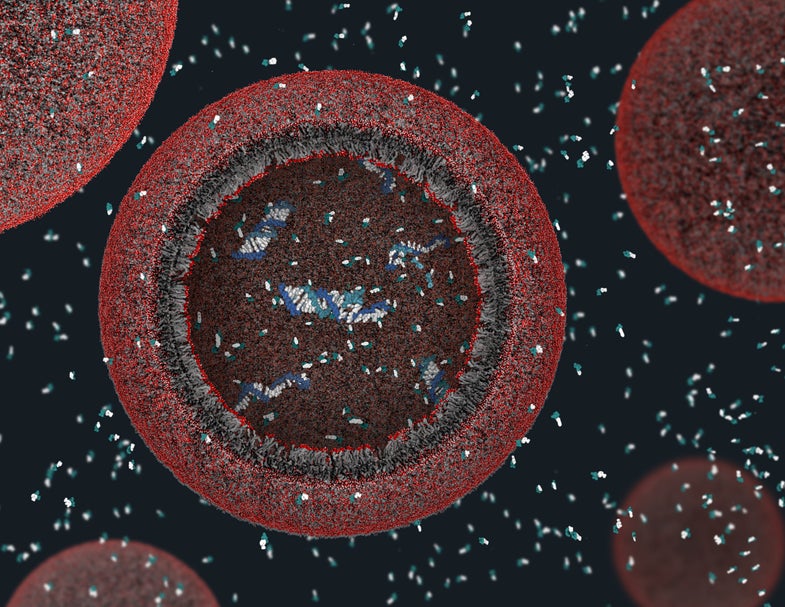 Scientists have a pretty good theory for how life on Earth began: Meteorites that bombarded our planet brought simple carbon-based compounds called amino acids. Eventually, slowly, these chemicals combined to make cells, which were then able to replicate and become the increasingly complex forms of life that we have today. But researchers didn’t quite understand the mechanisms through which the earliest life forms evolved; though these cells were able to replicate, they were not yet alive. Now a team of Japanese biologists has created artificial cells similar to those that might have first existed on Earth to better understand how they might have started to divide and evolve, according to a study published today in Nature Communications.

The researchers made a synthetic “protocell” made of DNA and proteins packaged inside lipids, which are fatty compounds meant to mimic the cell membrane. These spheres aren’t alive, but the DNA in them contains instructions to replicate under the right conditions. By changing the pH of the spheres’ environment, the researchers were able to trigger the cells to divide. But the hard part was replenishing the spheres’ supplies so that they could start the division process over again, as real cells do. To work around this, the researchers designed the newly split synthetic cells to combine with other cell-like structures nearby. It worked—the spheres had three successful generations in the lab.

What’s more, the researchers now think they understand the cyclic process by which their synthetic cells (and, thus, the protocells) might have divided: ingestion (the cells combine to replenish supplies), replication (the DNA is copied), maturity (the cells prepare to divide), and division (new cells split out from the parent). 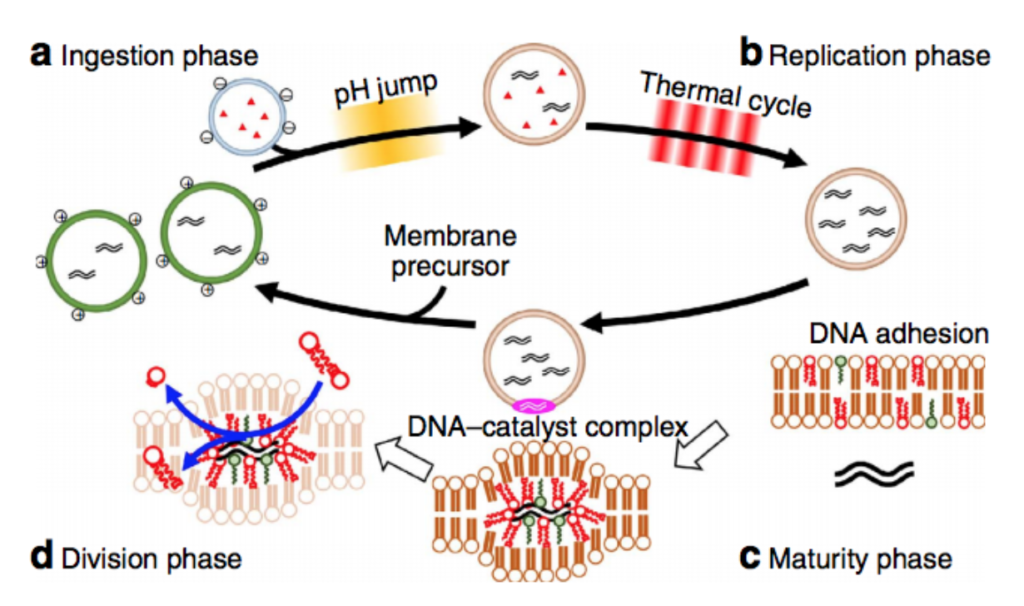 The researchers’ graphic of the protocell regeneration model.

The researchers believe that their model could mimic how the precursors for life formed and propagated—the cells would not have been self contained and would need to replenish their energy supplies before continuing to reproduce. The pH changes that brought on three of the four phase transitions could easily happen around hydrothermal vents, the study authors write. However, the study left some important questions unanswered. The researchers are still unsure about how protocells’ genes influence their physical characteristics, or phenotype, how evolution-driving mutations might have happened in them, and how fast they might have been able to replicate. They hope to create more sophisticated protocell models in the future to further investigate how the genes might have worked in these precursors to life.