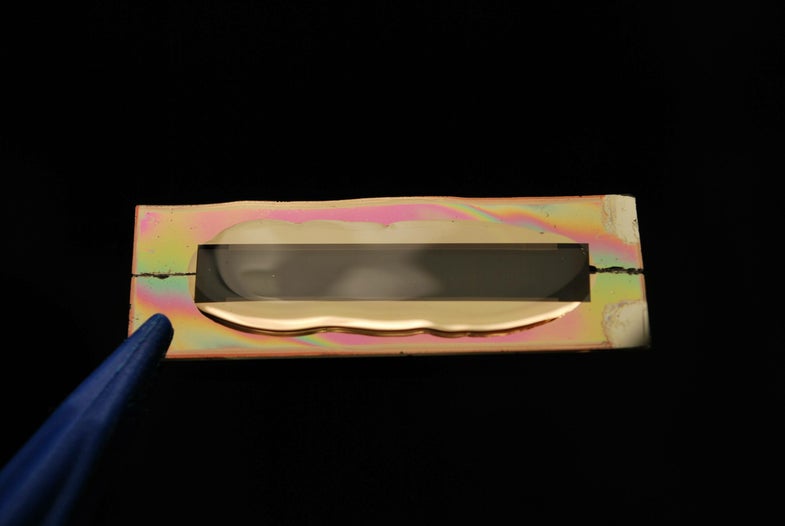 Smartphones, tablets, and most other electronics rely on rechargeable batteries, but after a few thousand uses the batteries start to lose their ability to hold a charge. The batteries of today are mainly lithium, and over time that lithium corrodes inside the battery.

Instead of lithium, researchers at UC Irvine have used gold nanowires to store electricity, and have found that their system is able to far outlast traditional lithium battery construction. The Irvine team’s system cycled through 200,000 recharges without significant corrosion or decline.

However, they don’t exactly know why. The original idea of the experiment was to make a solid-state battery: one that uses an electrolyte gel, rather than liquid, to help hold charge. Liquid batteries, like the common lithium variety, are extremely combustible and sensitive to temperature. The Irvine team was experimenting by substituting a much thicker gel.

“We started to cycle the devices, and then realized that they weren’t going to die,” said Reginald Penner, a lead author of the paper. “We don’t understand the mechanism of that yet.”

Although you may have never cracked one open (we hope), most of the batteries in your gadgets contain liquid. Liquid is used in part because its conductivity allows flexible and partial charging and discharging. Finding highly conductive electrolyte gels has proven difficult.

The Irvine battery technology uses a gold nanowire, no thicker than a bacterium, coated in manganese oxide and then protected by a layer of electrolyte gel. The gel interacts with the metal oxide coating to prevent corrosion. The longer the wire, the more surface area, and the more charge it can hold. Other researchers have been experimenting with nanowires for years, but the introduction of the protective gel separates UC Irvine’s work from other research.

“[The gel] does more than just hold the wire together. It actually seems to make the metal oxide softer and more fracture-resistant. It increases the fracture toughness of this metal oxide that is doing the charge storage,” Penner said.

While the technology promises consumer electronics that last 400 times longer, this initial test platform isn’t a true battery. Batteries have an anode, which allows electricity into the system, and a cathode, which outputs electricity. Instead of having both, the researchers linked together two cathodes that alternate charging each other. The continuous cycling from cathode to cathode makes a perfect system to test repeated recharging.

Penner says that it’s like pouring water back and forth between two cups. After a few hundred transfers from one cup to the other, some water will usually spill out, leaving less “charge.” That’s a normal battery. Penner’s system transferred the “water” between the “cups” 200,000 times, only losing about 5 percent.

Even though minuscule amounts of gold are being used in this experiment, that would still make these batteries be expensive to manufacture. Penner suggests that a more common metal, like nickel, could replace the gold if the technology catches on.

The lab’s future work will entail actually building batteries with this technology, and further investigating why the process works.