It’s not just that people kill snakes en masse—it’s how they do it. 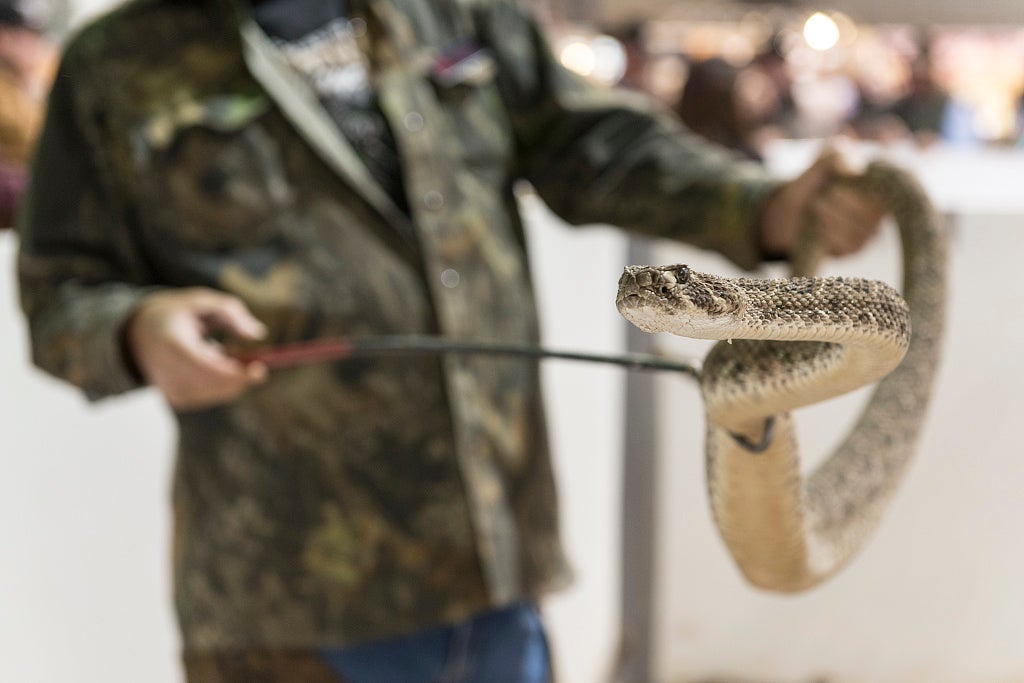 A snake handler at the Sweetwater Jaycees. Carol M. Highsmith via Library of Congress
SHARE

Each year, Texas’s Sweetwater Jaycees—“the world’s largest rattlesnake roundup”—begins with a rattlesnake parade. There’s also a Miss Snake Charmer pageant, a snake eating contest, and awards for the most snakes by weight and the longest snake in the show. But the main event, held each year since 1958, is an guided hunt in pursuit of western diamondback rattlesnakes, which can be charmed, judged, killed, and sold.

Int he south, such a pastime is hardly peculiar: rattlesnake hunting dates dates back to the 1700s, when colonists tracked down and killed the reptiles in the hope of protecting human families from its venomous bite. Today, springtime round-ups are still held in many states, including Texas, Alabama, and Georgia. But in the past few decades, a growing body of evidence has shown that round-ups often do more harm than good.

Hunting for certain species of snakes is a perfectly legal thing to do in most places—if you pay for the proper license and heed the strict bagging limits. In Pennsylvania, for example, residents can pay a $25 fee in exchange for the right to kill one adult copperhead. In the Sunshine State, the South Florida Water Management District will actually pay you for taking the risk of hunting Burmese pythons, an invasive species, in Everglades National Park.

But rattlesnake roundups are altogether different. In many southern communities, humans seek their scaly prey en masse—and often use gasoline to meet their ends. In Alabama, residents historically gassed eastern diamondback rattlesnakes out of their wintertime hidey-holes by spraying the fuel through a water hose. When a snake smells the substance, it slithers out of its abode where hunters could easily harvest it. In Texas, meanwhile, residents prefer pumping gasoline fumes (and, often, straight liquids) into the critter’s burrow, producing the same escape response.

The act of gassing has serious consequences for the environment, says John Jensen, senior wildlife biologist for Georgia’s Department of Natural Resources. In Georgia and Alabama, native rattlesnakes have reportedly declined in population and size since the festival-like hunts began in earnest in the 1950s. But they’re not the only animal that’s threatened by roundups.

“Eastern diamondbacks predominantly use the burrow of the gopher tortoise. Its burrows are known to provide a home for over 350 species, including the Eastern indigo snake, the gopher frog, and the pine snake,” he says. While the rattlesnakes escape gassing—if not for long—“other species that aren’t active in the winter just stay down there and die.”

In Georgia, the threat to the gopher tortoise, which is the state reptile, allowed Jensen’s department to realize some of its most pressing goals. While hunting rattlesnakes is still legal, gassing is now outlawed, though many people continue to do it and, occasionally, get caught. The threat of federal intervention (the tortoise is under review by the federal for listing as threatened, and potential protection, under the Endangered Species Act) also appears to have helped persuade two of Georgia’s last three roundups to change their event planning strategy.

Fitzgerald, Georgia was the first to change. As a replacement event, the town chose to host an annual Wild Chicken Festival. (Tagline: “We are strutting our stuff.”) While it may not be PETA-approved, residents now leave native snakes alone, and instead chase after the plentiful descendants of Burmese chickens the state Department of Natural Resources stocked as game birds back in the 1960s.

Claxton was the other of the two Georgia towns to reimagine itself. For decades, the Evans County Wildlife Club had hosted a typical hunt and sale of rattlesnakes. Now, they run an annual Rattlesnake and Wildlife Festival in town instead. Captive snakes are displayed, and it’s an opportunity for families to learn about local animals. There’s also a car show, archery tournament, and, yes, a pageant.

Only one town holds out: Whigham, Georgia. “We first talked to Claxton and Whigham probably about 10 years before Claxton changed,” Jensen says. “Eventually, Claxton saw that as an opportunity they felt was worth pursuing and made the jump. But Whigham has not done so.” Whigham now gets to bill itself as the last rattlesnake roundup in Georgia, Jensen observes, which is potentially a boon to their bottom line. But the number of rattlesnakes the event collects has declined each year, because Eastern diamondbacks just aren’t as plentiful as they used to be.

Things are a little bit different in Texas. The western diamondback rattlesnake is not thought to have suffered population-level declines from events like the Sweetwater Jaycees. And due to a lack of political will in the state legislature, gassing remains perfectly legal. But there are people agitating for change.

John Davis is the director of the wildlife diversity program in the Texas Parks and Wildlife Department. For six years, he and his team researched rattlesnake roundups and their affect on the environment. On a recent call, he told me, emphatically and repeatedly, that he is not interested in ending the rattlesnake roundups themselves (which he calls “very important in the structure and culture of Texas”), but the damage wrought by gassing. “All of our research, all of our concerns, are wrapped up in this method of take,” he says. The main reason? Rare-karst invertebrates.

While not nearly as charismatic as Georgia’s gopher tortoises, these spiders, beetles, and other small bugs are exceedingly rare. They live in the subterranean nooks and crannies of Texas’s groundwater system (called a karst), so most people have never seen one. But their extreme ecological niche means one population in one Texas county might well be the only population of that species in the entire world. When gasoline sprayed across the surface of the earth seeps into their underground worlds, they die.

Despite this and other environmental damage (like the threat of pollution to groundwater supplies), organizers of Sweetwater Jaycees and similar events continue to justify the festivals. Roundups are often touted, for example, as a way to improve public safety. But the evidence just isn’t there. “You can track snake bite data, and there’s no correlation between snake bite data [declining] and round-up data,” Davis says. It might even be the other way around. “The very act of trying to capture and handle snakes artificially increases the number of snake bites that happen.”

Organizers argue these events are important sources of anti-venom, a life-saving medication that’s often in short supply. But, once again, there’s little evidence to support their claims. The major producers of anti-venom don’t accept animals from roundups. Even if roundups were outlawed, the venom milked from captive snakes, bred for this specific purpose, can or already does meet their needs.

Ultimately, says University of Florida Extension herpetologist Steve Johnson, “these old traditions die hard.” But if we’re to protect these natural ecosystems, something’s got to give.

Correction: The story erroneously referred to the Eastern indigo snake as the Eastern Indian snake. It has since been updated.