Greenland’s Big Problem Is a Little One

Small glaciers, not large ones, account for melting island 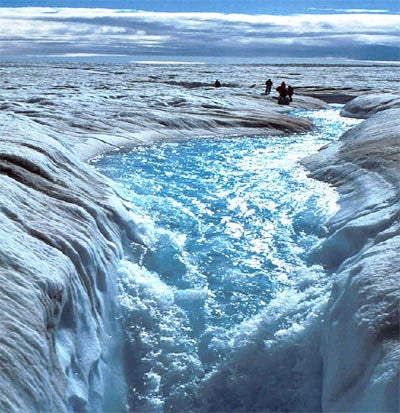 Though its cause may still be contentious for some (ahem, Sarah Palin), it is undeniable that Greenland is disappearing at a startling rate as large chunks of ice break off from the mainland and float away as icebergs. Until now, it was commonly thought that the melting and break up of mammoth glaciers was the most dramatic example of Greenland’s changing landscape; however, new research shows that the real culprits are dozens of much smaller outflow glaciers dotting Greenland’s coast. Together, these petite glaciers are responsible for an amount of ice loss three times greater than that of their bigger siblings. The most recent report, published in the journal Geophysical Research Letters, states that almost 75 percent of Greenland’s diminishing ice cap is due to these small coastal glaciers drifting out to sea.

To monitor these coastal areas, scientists at Ohio State University used a combination of highly refined remote sensing techniques that employ two ground-observing satellites. ICEST (Ice, Cloud, and land Elevation Satellite) examines flat areas while ASTER (Advanced Spaceborne Thermal Emission and Reflection Radiometer) is designed to observe the steeper regions of the ice sheet. When combined, the researchers had a comprehensive, high-resolution look at ice elevation change (the rate at which the ice is going up or down). The scientists also pointed out that research like this does not necessarily require fancy new equipment, but, more importantly, the correct combination of pre-existing tools.

Once they had their picture, the team saw, for the first time, that there is widespread thinning in the zone within 62 miles of the ice edge of Greenland. And it is not just thin ice holding steady. The entire area is melting at a rapid pace, and the ice elevation is decreasing at faster rates as it moves deeper into Greenland.

The satellites focused on a southeastern area of about 32,819 square miles, around one-fifth the size of Greenland. Kangerdlugssuaq and Helheim are two of the largest glaciers in that region, and they do contribute more to total ice loss than any other single glaciers. Their names might be intimidating, but regardless, it is the thirty smaller glaciers in the territory that are doing more damage, contributing 72 percent of the total ice lost. Power in numbers.

Some of the largest Greenland glaciers, like Jakobshavn and Petermann in the north, are regularly monitored. This study shows the need for closer watch over conglomerates of smaller, coastal glaciers, which break off and flow more quickly to the sea as global temperatures rise.

While no Titanic-style mishaps are likely with these icebergs floating around in the northern Atlantic, the fact that they are there at all, and no longer part of Greenland, is still—pardon the pun—chilling.