Trying literally to raise the roof, the "Three Little Pigs" project gets underway 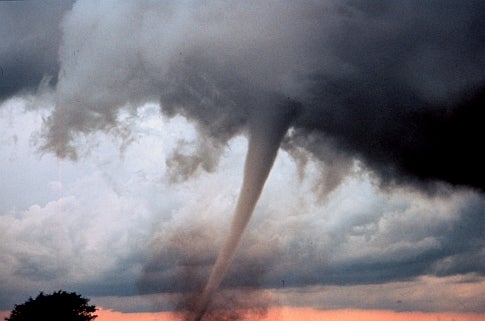 In London, Ontario, a team from the University of Western Ontario is bringing a fairy tale to life at the Insurance Research Lab for Better Homes. They don’t have a wolf, but in their “Three Little Pigs” project they are literally trying to blow the roof off, subjecting full-scale houses to pressures that simulate wind forces matching those of a Category 5 hurricane: 200 mph. Researchers are looking to find the sources of structural weakness in house construction in order to improve building design in the future.

The controlled environment in which this windy city comes to life has a hefty price tag — $7 million — and is the first of its kind. The abused model home is not made of straw or sticks or brick, but is a two-story, four-bedroom home measuring 1,900 square feet, typical of houses in the region. For mobility, it is enclosed in a hangar that can run on tracks. During tests, the surrounding framework is rigged up with 60 “pressure boxes” that bring on the pressure, through large hoses that are able to suck and blow in a manner that mimics a wind force. Such realistic testing has never before been performed on a full-scale home. According to researcher Greg Kopp, the force created is like “turning the house upside down, adding weight to it, and shaking it!”

In their artificial hurricane zone, researchers are pinpointing how the weight of the house redistributes itself once the roof is damaged, and using that information to determine if building codes are up to snuff (or huff and puff, as it were). Eventually, their goal is to test different building products and wind damage mitigation strategies under the same conditions.

It’s not only wind that can ruin a home, so the team is concurrently observing damage caused by water and mold, of the sort—recently seen on a large scale after Hurricane Katrina.

With many homeowners feeling the economic pinch these days, researchers are not looking to redesign entire houses. Instead, they want to identify basic additions and amendments that could be made to pre-existing houses to make them stronger and safer, without burning a hole in people’s wallets — a concern the wicked wolf never had.