Harry Kloor may be the world’s most well-rounded nerd. He is the only person to have earned doctorates in physics...

Harry Kloor may be the world’s most well-rounded nerd. He is the only person to have earned doctorates in physics and chemistry simultaneously, and he has penned episodes of Star Trek: Voyager. And when NASA asked him for help in improving its image with young people, he drew on both of those experiences. The best way to get kids enthused about outer space, Kloor figured, was to hide their medicine in a bucket of popcorn. Next February, Quantum Quest, a star-studded CGI space adventure that pairs animated protons with real footage from NASA spacecraft, hits theaters. “Many of NASA’s scientists were inspired by Star Trek and Star Wars,” he says. “I want to inspire that kind of passion.” We caught up with Kloor to find out why kids will go nuts for quarks.

Q: Why was NASA involved in making a CGI movie?
A: We wanted to advance science and space literacy in a way that will appeal to kids who have little interest in such subjects. In grad school, I used franchises like Spider-Man and Star Trek to spark public interest in science. The natural next step was to create a story that embodied real science in a fun and exciting way.

Q: What’s the plot?
A: Dave is a photon who lives in the sun. When the Core, played by William Shatner and symbolizing all the stars, battles the Void—the embodiment of the nothingness that existed before the big bang, voiced by Mark Hamill—Dave leaves the sun, as an actual photon would, to save the universe.

Q: This has to be the first time a photon has gotten a starring role in a film.
A: Yes, but by building the characters out of various building blocks of matter, we can teach physics and chemistry through their interactions. Kids love complex characters. They can name 50 dinosaurs, and particles have a similar appeal, with an exotic nature and names like “neutrinos” and “antimatter.” Tell an eight-year-old that quarks come in six flavors and they will soon know more about quarks than you do.

Q: How else does this film stand apart from the average space flick?
A: We use images from various spacecraft—Cassini-Huygens, STEREO, Mars Express—and place our characters into a very real universe. It’s the most scientifically accurate rendering of our solar system in any movie. 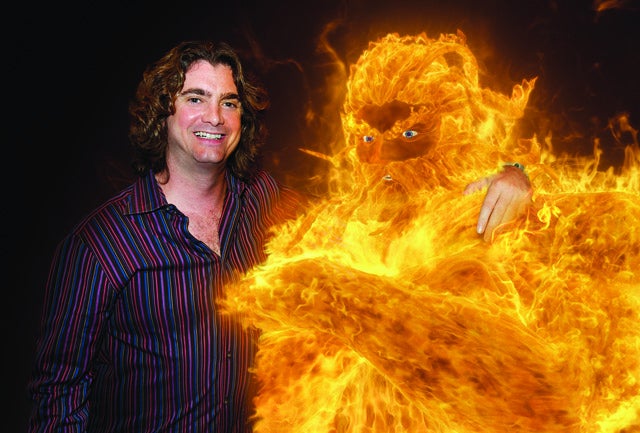