QinetiQ’s Robot Can Switch Hands During A Mission 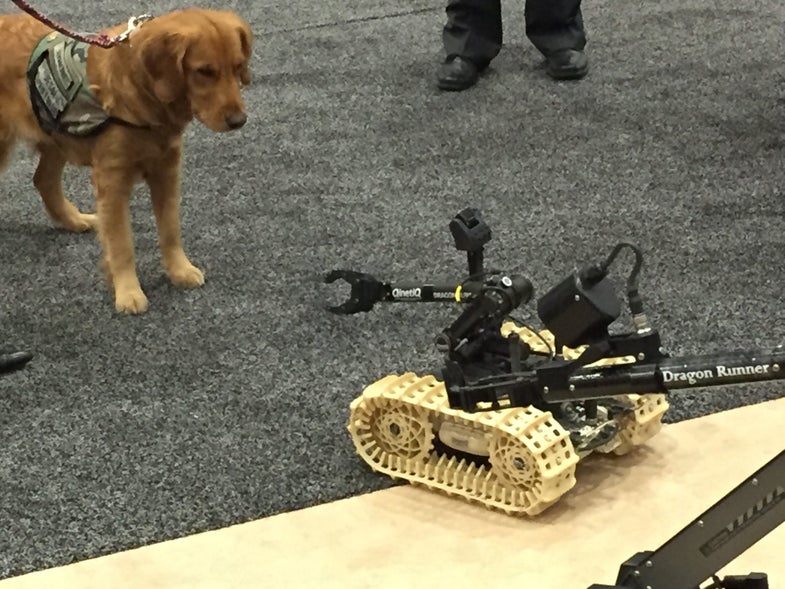 If any military robot has earned the distinction “venerable,” it’s QinetiQ’s Talon series. Used in Bosnia in 2000 and to search through rubble after September 11th, 2001, the Talon series of robots have served the entire duration of the War on Terror, making them an invaluable tool for explosive disposal. The latest, Talon V, was on display this week in Washington, DC, as part of the Association of the United States Army conference and technology showcase. And this one can swap out hands.

Talon V is, like its predecessors, essentially a camera-toting arm on tracks. The body on display at AUSA had an arm made for work with chemical, biological, radiological, nuclear and explosive (CBRNe) threats. This included a military chemical sensor, an industrial chemical sensor, and a sensor on the back to detect radioactivity. Its arm can lift over 65 pounds, and in can operate for 4-5 hours straight under typical use. This is great, as explosive detonation scenarios can sometimes take a while.

For increased versatility, the Talon’s body is friendly with other parts, allowing it to swap out other arms and radios, depending on who is using it and what they need it to do. On the back of the Talon V display model sat a rack of three spare arms. Made by Stratom, the arms included a digging claw, a wire cutter, and a hook. Secure in their mounts while the Talon drives, the hands can be released and swapped out by the robot during operations, in case it needs to do something new.

While the author was test-driving the Dragon Runner, a smaller tracked robot with an arm also made by Qinetiq, a service dog in training walked by. The dog was initially skeptical of the robot, but at the urging of its trainer, the dog got closer to the machine.

Eventually, through calm urging, the service dog learned it didn’t have to fear the robot.

This is great for service dogs in real life, but terrible for the fictional universe of the “Terminator” movies, where barking dogs are often the only warning humans get before the machines attack.