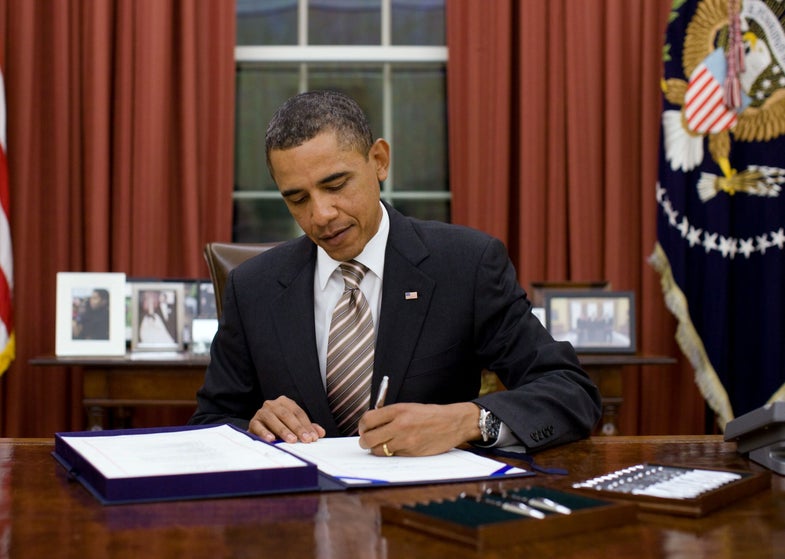 President Barack Obama signs H.R. 2751, the ÒFDA Food Safety Modernization Act,Ó in the Oval Office, Jan. 4, 2011. (Official White House Photo by Pete Souza) This official White House photograph is being made available only for publication by news organizations and/or for personal use printing by the subject(s) of the photograph. The photograph may not be manipulated in any way and may not be used in commercial or political materials, advertisements, emails, products, promotions that in any way suggests approval or endorsement of the President, the First Family, or the White House. Pete Souza
SHARE

If you’re a tech company, you know you’ve screwed up bad when President Obama is taking shots at your latest product. Samsung’s newest handset, the Galaxy Note 7, was released to stellar reviews followed by its very sudden downfall. While many claim the phone was Samsung’s best yet, reports of the device catching fire tainted the company’s image. Then, a recall was hampered by the “fixed” phones also catching on fire. Samsung may have to wait until the 2017 release of their Galaxy S8 before it can salvage from the flames whatever is left of the brand. But in the meantime, POTUS will have something to say about the South Korean company.

At an event in Miami, President Obama addressed the audience to talk about Obamacare and health care reform. To better clarify his point about making changes to the (often criticized) Affordable Care Act, the president used Samsung’s faulty phone as an example.

If company releases a device with bugs, they fix it, he said. “Unless it catches fire. Then you pull it off the market. But you don’t go back to using a rotary phone! You don’t say, ‘Well we’re repealing smartphones.'”

Check out the whole clip below:

It may not just be Samsung plagued with the problem. A recent report from Yahoo 7 News claimed a surfer in Australia left his phone charging in his car only to find the phone, the clothes it was left under and the interior of the car completely charred. Our iPhone 7 review unit has yet to catch flames (for now).

While this may be the end of the line for Samsung’s Note 7, there is a chance the company could make things right upon the release of their next flagship device: the Galaxy S8. Though fans will have to stay patient until around early next year.