PPX: You’re in on the Action

The inside scoop on ISHARE and ATLANTIS, user input in the forums, and more. 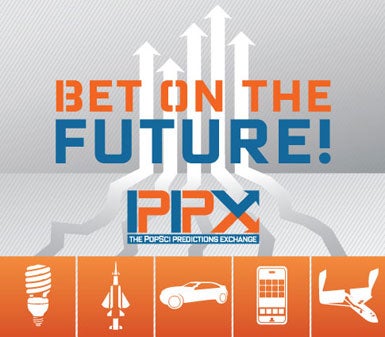 “Change” is the word of the season, and it’s in the air in the Popsci Predictions Exchange. Our prop review process is well under way and is yielding new props with clear payout statements— thanks to everyone who’s contributed specific suggestions! You can get in on the action (and, as a perk, see the props two days before they go live) in the Popsci forums. We’ve seen a host of new activity in these forums over the past few months, and lots of new names as well. Upload an avatar to your profile and get to know your competition! Discuss the props and the science behind them, and share what you think and know.

In other PPX news, because there are a huge number of stocks closing out with the new year, and many others with closeout dates well into ’09, we’ve shaken things up a little; tomorrow’s prop has a quick turnaround time. It’s end-date is November 4th, 2008.

We’re closing ISHARE out today. It’s payout statement reads: “This proposition will pay out at POP$100 if, by February 31, 2009, someone uses Apple’s SDK to build a program for the iPhone that allows it to make phone-to-phone calls, whether via a Wi-Fi signal or any other means, without it showing up on any carrier’s network or otherwise being charged to a user’s cellphone bill.” Well, software called “Fring” is available as a free download and works on the iphone or ipod touch to allow people to make phone calls using wifi with a variety of services including Instant Messenger. Here’s the story.

Lastly, the payout clause for ATLANTIS reads: “This proposition will pay off at POP$100 per share if the Atlantis mission is derailed because of space trash by the end of October 2008.” Recent news announcements have shown that the mission is delayed, but due to problems with the Hubble telescope, not space trash. While it looks like the delay will last well into next year, we’re going to hold off on paying short until the end of the month, as space trash may still make an appearance in more in-depth coverage on the delay.

Offer your suggestions, prop requests, and ideas in the PPX forums.