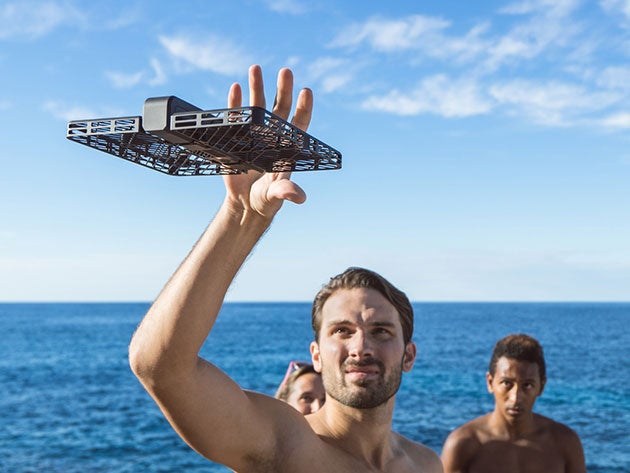 It’s that time of year again: family, eggnog, and ridiculous deals on tech. Check out these 10 items that are on sale in the Popular Science Shop. You can also use the discount code BFRIDAY20 at checkout to redeem an additional 20 percent off.

The Slughaus Bullet 02 Flashlight is the perfect gift for friends who are students of the Second Amendment. Manufactured from aerospace grade aluminum and inspired by the iconic 40 S&W round, the Bullet 02 is waterproof, submergible, fireproof, and totally compact. They’re even durable enough to be run over by an SUV. Talk about rugged. These lights are normally $45, but you can grab a 3-Pack for just $24.99 in the Popular Science Shop.

The Hover 4K Camera Passport Self-Flying Camera Drone is another great option for the photo enthusiast in your life. This drone doesn’t even require a remote because it uses facial recognition and hand gestures to follow you around and capture footage. It folds up to a travel-friendly size which makes it especially great for getting footage of your globetrotting adventures. One of these usually costs $500, but it’s 30 percent off in the Popular Science Shop for just $350. (*Excluded from coupon code)

Sleep soundly with the SHEEX Original Performance Sheet Set, because these high-tech sheets are designed with enhanced breathability, advanced thermoregulation, and unbelievably soft fabric. They actually transfer body heat twice as effectively as traditional cotton sheets, so you won’t wake up hot and sweaty anymore. Now you don’t have to drop $200 on them either, because they’re 25 percent off in the Popular Science Shop for just $148.99.

The Ultimate DIY Arduino Robotics Bundle is your chance to learn everything about building robots. With over 22 hours of training, by the end of the three course bundle, you’ll be able to assemble a robot that can sense light and follow a lined path. Usually, a bundle like this costs $300, but the Ultimate DIY Arduino Robotics Bundle is now just $21 in the Popular Science Shop for Black Friday.

The Hyperchiller Coffee Chiller is the piece of tech you never knew you needed. Why bother drinking watered down iced coffee or waiting hours for a cold brew mix to be ready? With this chiller, you can turn hot coffee into iced coffee in just one minute. The Hyperchiller keeps the coffee and ice separated, so your coffee cools without getting diluted. You can buy a 2-Pack now in the Popular Science Shop for just $45, a 25 percent savings.

The Martian mVoice Smartwatch is the perfect watch for someone who hates the appearance of most smartwatches. It’s perfect for an on-the-go lifestyle, but utilizes the timeless design of a regular watch. The Martian mVoice Smartwatch is compatible with Amazon Alexa and even allows you to get push notifications from your favorite apps. The watch even has a shutter control button for snapping group photos. This handy timepiece will usually run you $295, but you can get it for 55 percent off in the Popular Science Shop now—that’s just $129.99.

The Ethical Hacking A to Z Bundle provides a $1,273 education for just $39 – that’s 96 percent off what you’d normally pay. With this bundle, you’ll learn all about social engineering, web penetration testing, and even gaining control of other computers. This bundle’s eight courses offer over 45 hours of content at an incredible $39 price in the Popular Science Shop.

These HomeSpot AirBeans X True Wireless Earbuds are truly the earbuds of the future. Normally $69.99, you can snag these buds in the Popular Science Shop for just $49.99. Never worry about wires again, without having to sacrifice sound quality. You’d never know it because they’re so compact and comfortable, but these earbuds pack a powerful and crisp sound. Get them now while they’re 28 percent off.

The best-selling Code Black drone not only looks great—it also takes great video. Six-axis stabilization keeps your shots rock steady, and this drone is easy for first-time pilots to control. Worth $199.99, the Code Black is now just $34.99.

If you’re a ride-or-die Mac user planning on getting a new laptop soon, you need the Black Friday Mac Bundle, which features eight key apps. Included are PDF Expert, Roxio Toast Titanium, Default Folder, WALTR, Flux, Stylizer, Art Text, and MacReviver. These basic apps are the essential tools you need to make your Mac run flawlessly. And you don’t have to pay the retail price of $492.86, because they’re 92 percent off in the Popular Science store. Get the whole bundle for just $29.

Don’t forget to take an additional 20 percent off these deals with code BFRIDAY20 (thru 11/25)!