Pooping on a mountain is even more complicated than it sounds

Our guide to evacuating ethically in the wilderness. 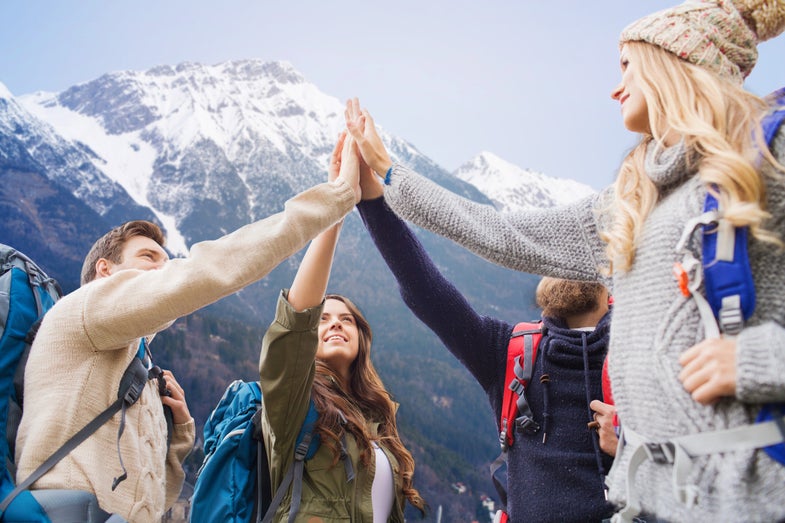 Even most casual hikers know to “pack out” their garbage—burying paper products on the trail in the hopes they’ll biodegrade and not cause harm is a naive act. Slightly-less-casual hikers will reluctantly admit that this extends even to used toilet paper. But many folks who hit the trail think it’s just fine to leave the poop itself behind. Unfortunately, that’s not always the case.

A mountain of crap made news this week when Michael Loso, a glacier geologist with the National Park Service, concluded that Denali—a 20,310 foot peak in Alaska, and North America’s tallest summit—is in serious danger due to hikers’ poo.

For the past decade, hikers marching up the Kahiltna glacier en route to Denali’s summit were told to pitch biodegradable bags full of feces into deep, dark crevasses along the way. But Loso estimates that much of the 215,000 pounds of human waste ditched there from 1951 to 2012 is probably still intact.

According to Loso’s years of research, most of the poop probably stays close enough to the glacier’s surface to remain just below freezing, where many strains of bacteria can thrive. The Associated Press reports that much of the built-up waste might begin to reappear in remote spots as ice melts. Even if hikers aren’t subjected to the sights and smells of thawing stool, the many visitors who rely on melted snow for drinking water will be more likely to take sips contaminated with dangerous bacteria and parasites. The park is proposing rule changes that would have climbers dispose of fecal matter at either a particular ranger station (100 miles south of the entrance to Denali National Park) or one particular crevasse 14,200 feet up, which is deep enough that dropped deuces should not pose problems for future hikers.

Of course, this isn’t a new issue; poop poses a problem pretty much anywhere people like to hike. And it’s especially irksome on high, frigid summits where people can’t simply dig down deep into the dirt to do their business. Some have referred to Mount Everest, for instance, as a “fecal time bomb.” Even hiking trails with dig-able dirt are increasingly overrun with poop—a deep, dark hole in the soil doesn’t really allow your waste to break down; it just sits there festering with microbes—which makes it more likely for a bout of rain or a big snow melt to send pathogens plunging down into commonly-used waterways.

Okay, so: how does one avoid leaving behind dangerous fecal waste?

Sometimes, burying your poop is okay

If you can get 200 feet away from the nearest water sources, trails, and campsites, dig a hole at least 6 inches deep, and do your business quickly enough to cover it up before disturbing the local wildlife, you’re probably not doing anyone any harm. This is especially true if you pack your used toilet paper up in ziplocs instead of burying it. But keep in mind that thousands of other hikers are taking the easy poo route right along with you, and you’re all contributing to a problem that might one day hit critical mass. Wouldn’t it be nicer to know you’re absolutely, definitely not subjecting some future backpacker to explosive diarrhea when you take a dump? Yeah, we think so too.

And if you’re hiking somewhere too rocky or icy to dig a so-called cathole, there’s no excuse. DO NOT EVACUATE IN A CAVE.

Packing out stool doesn’t have to be disgusting

Preparation is the key to an ethical and sanitary mountain poo.

If you’re going to pack it all out, a WAG (Waste Alleviation and Gelling) bag will make your life a lot easier. There are lots of existing WAG bags you can buy all ready to go; most kits will include an internal bag for catching waste, something inside to help neutralize odors, and an exterior bag to keep it all from exploding inside your backpack. Cleanwaste GO Anywhere Toilet Kit Waste Bags get solid reviews, and you can get a pack of 12 for less than 40 bucks. Most people poop once a day so that purchase should get a pair of hikers through a decent backpacking trip without much drama.

For DIY-or-die types, homemade WAG bags are an option. Get yourself a bunch of bags to poop in (biodegradable puppy poop bags are a logical choice) and scoop a bit of cat litter into each one before you hit the trail. Once you’ve done the deed, you can shove the whole mess into a sturdier external bag—Trailspace recommends freezer-strength Ziploc bags—and pack it away for later disposal.

Whether you’re using a store-bought or bespoke WAG bag, remember to drop any toilet paper or wet wipes in with your poo before sealing the whole thing up. You definitely don’t want to leave those behind. Don’t forget to sanitize your hands as you seal up the bag, too; plenty of hikers get sick from their own feces.

If the actual mechanics of pooping into a WAG bag have you confused, Leave No Trace has a video to help you out:

This is just the part where we tell you that human urine is much less dangerous than human fecal matter. You should still urinate 200 feet away from campsites and water sources because that’s just common gosh-darn courtesy for your fellow humans, but as long as you’re not peeing in any sources of drinking water or close enough that others are liable to smell it, you’re golden.

Remember: you cannot control where other people poop

You can and should limit the spread of your glorious gut microbiome throughout the hills and valleys of the backcountry. But you can’t assume all hikers will show the same consideration. So please—no matter what you’ve read on the internet—do not drink unfiltered water. The times you’ll get away with it will not make up for the one time you’ll get a painful bout of diarrhea on an isolate trail.