Why you should think twice before getting in a pool

Pools are festering, pathogenic baths that we fool ourselves into thinking are clean. 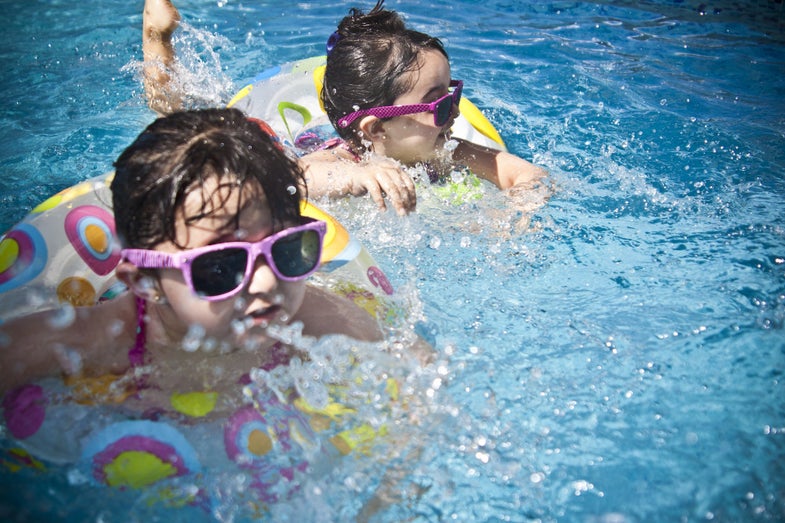 Pool water smells like disinfectant. It has that cloying, antiseptic aroma that at once deters and reassures you that someone has designed this body of water for you to swim in. It’s got chlorine—it must be clean. Just smell it.

But unfortunately, our liberal use of chlorine in pools isn’t keeping people safe (and all the people peeing in there aren’t helping). If anything, you’re more likely to get sick from the pathogens in pool water than a natural body of water. That’s according to two recent studies from the Centers for Disease Control (CDC) on treated vs. untreated “recreational water.”

The CDC generally tracks outbreaks like this—those caused by pathogens—but they’ve started monitoring water-borne infections more closely because of the rising danger posed by chlorine-tolerant bugs. Researchers at the CDC noted that they are now the leading outbreak cause. An “outbreak,” in case you were wondering, is defined as two or more persons contracting a similar illness from the same location and time of exposure. There were 493 outbreaks caused by treated recreational water from 2000 to 2014 (that’s from a pool, hot tub, spa, or water playground) resulting in 27,219 cases and eight deaths. Eight deaths.

In that same time period there were only 140 outbreaks from nontreated water like lakes or rivers or oceans, and 4,958 cases of illness from those outbreaks. Two people died.

Without knowing exactly how many Americans visited treated versus nontreated water locations, we can’t know whether this means that pools are inherently more dangerous than lakes. There are some rough estimates—one U.S. Census Bureau statistical abstract puts the total number of visits are 301 million—but precise numbers are close to impossible to get. The CDC researchers note that they’re probably not even getting an accurate number of illnesses, since it depends on reporting that information to the CDC itself. We can know that there are about 309,000 public pools and 10.4 million residential ones, but tracking the precise number of visits to every river, lake, ocean, pool, hot tub, and spa would be a massive undertaking.

But many, many more people seem to get sick at hotels than at beaches.

Which is not to say that you should drink unfiltered, naturally occurring water (or “raw water,” as Silicon Valley people call it). Water in streams and lakes can contain chemicals like pesticides that seep out of the surrounding land, plus bacteria from animal poop that’s in and around the water. That’s why we established the Safe Drinking Water Act in the first place—because drinking water easily poses a major public health risk if not properly sanitized.

Though the kinds of infections people came down with at treated and untreated locations varied, there was one commonality: poop. Human poop. Most of the pathogens causing problems get transmitted via the fecal-oral route, meaning an infected person swims in water and the bug travels from their anus into the water, and then someone else either swallows that water or inhales aerosolized droplets of it. For instance, about 80 percent of the illnesses contracted from treated water were caused by Cryptosporidium, a parasite that lives in animal intestines and spreads by shedding itself from feces into water sources. The illnesses from untreated water were more varied, but the main culprits still tended to come from poop. Norovirus was the single biggest contributor, at about 30 percent of all cases, and that’s spread through vomit and feces. The most common bacterial infection, Shigella, spreads through diarrhea.

Chlorine can control many of the other pathogens that made people sick from pools and spas, but Crypto can survive in chlorinated water for more than a week. That makes it easy for the parasite to spread to anyone who swims in that water, and then to anyone who swims in water that all those other infected people swim in. This is how outbreaks happen.

If you, like me, are now worried about swimming in any public place, the best thing to do is avoid hotels (and especially hotel hot tubs). 32 percent of the outbreaks came from hotels, and of those about 40 percent were associated with hot tubs or spas. And that was just for the outbreaks where the CDC could identify the pathogenic cause. Among unidentified outbreaks, half were from hotels. The combination of warm water and lots of people from lots of places is trouble, especially if the staff doesn’t properly chlorinate their water. Public parks came in second, at 23 percent of outbreaks, followed by 14 percent at clubs or recreational facilities.

Avoiding outbreaks is as simple as avoiding public pools, which is to say simple but perhaps not easy. Summer is hot. Pools are cooling. For a lot of people, the local swimming hole is both the main social activity and the best way to stay out of the heat during July and August. Apart from being a responsible person or parent by not allowing anyone to swim who’s had diarrhea recently, the CDC recommends one other option: get some test strips. Pool supply and hardware stores often carry testing strips for pools that determine chlorine level and pH. They’re light and portable, so you can stash them in your pool bag and make a habit of testing the water. If the pool doesn’t have enough chlorine, report it to the staff. You can also try to check the location’s inspection score—there’s a list online here that links to resources by state and county.

If you’re lucky enough to live by an ocean, river, or lake—go there. Any water with lots of humans swimming in it is likely full of potential pathogens, but at least in a larger body of water you’ve got the benefit of dilution. Any pathogens from people’s pee and poop will get distributed throughout a much larger volume, thus making it less likely that you’ll swallow parasites or bacteria. And if you must go to a hotel pool, at least stay out of the hot tub.