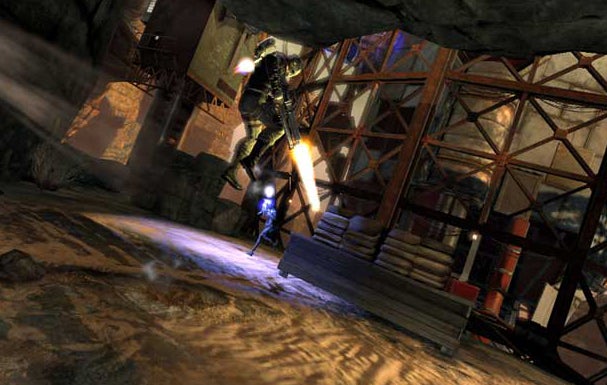 I recently got my first look at two very different games from Capcom that share one interesting trait –your on-screen character will fly through the air with the greatest of ease (although not getting shot and landing without killing yourself prove pretty challenging).

DarkVoid was first to catch my eye.

It’s your basic dystopian parallel universe/action-adventure shoot-em-up, with heroic humanoid you taking on a world crawling with alien baddies. What makes it slick, though, is the rocket-powered pack you wear on your back.

Loyal Pop Sci readers know that we’ve been promising personal jetpacks since roughly 1880. In Dark Void, you finally get one, and it’s a nifty-looking piece of gear. If you saw the retro sci-fi movie The Rocketeer, and turned away from the delectable Jennifer Connelly long enough to glance at the hero, then you know the look.

The believable sensation of free flight is exhilarating, and the gameplay it enables is a kick. You fight your way forward through a section and then, when you run into an insurmountable obstacle, fly upward into combat against vertically arrayed enemies. M.C. Escher, your game is ready.

The other title that lifted my spirits is Bionic Commando. Lee Majors and his Six Million Dollar physique are nowhere to be seen in this radical update of a classic Nintendo game. Instead, you’re a former super-soldier who’s been betrayed and imprisoned by your government.

When terrorists strike, though, you’re brought back into service (seems your military-issue bionic arm makes you popular in a crisis). It lets you shoot out a wire and grapple onto overhead structures, then swing and swoop through the air, raining death from above and literally getting the drop on the enemy.

Yes, there’s more than a whiff of Spiderman in the motion of the locomotion, but you have better control over airborne acrobatics than the Spidey games to date have offered. For example, here you can reel in the wire or let it run long to better control where each swing lands you. It took about two minutes to get the hang of it, but the more I fiddled with the controls, the more subtle control I could achieve.

Both games will land on PlayStation 3, Xbox 360 and PC, though details are still up in the air. Dark Void is expected by year’s end, but neither game has a firm launch date yet.