Can we learn something from bird democracies? 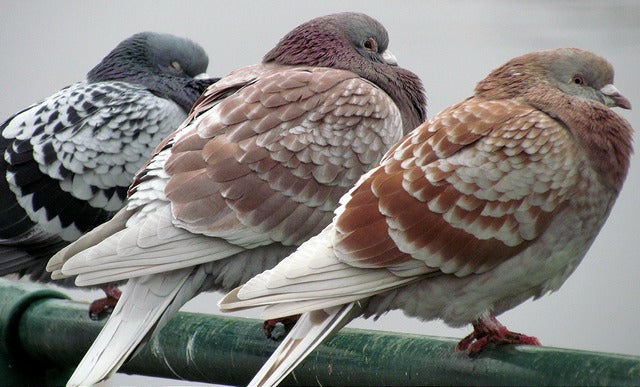 Speed wins over competence in the pigeon world: The fastest, not the smartest, pigeons become leaders of the flock. But a new study published in the Royal Society journal Biology Letters shows potential for a coup in the coop when the head pigeon flies astray.

Researchers at the University of Oxford confused pigeons using “clock-shifting,” to mix up their navigational abilities. This is essentially intentional jet-lagging: Homing pigeons are kept in a light-sealed room, where artificial lights are turned on and off at intervals out of phase with the sun’s natural light. When they’re released, they’ve been calibrated to head in the direction you want them to fly.

Taking eight GPS-tracked flocks of five birds each, they clock-shifted either the whole flock, none of the birds, or only the lead bird. In those where the whole flock was on the same, wrong page, they tended to deviate away from their homeward path. When just the leader was confused, however, the rest of the birds course-corrected, despite the leader’s incorrect path. The head bird spent less time at the top, and lost more followers when the rest of the flock knew what was up.

“The exact mechanism by which a flock is able to correct for misinformation coming from its leader is still unclear,” lead author Isobel Watts told Phys.org. “However, we can speculate that it may be due to either misinformed flock leaders doubting their own abilities and paying more attention to what their flockmates appear to be doing, or the flock members recognising weakness in the leader and taking more control themselves.”