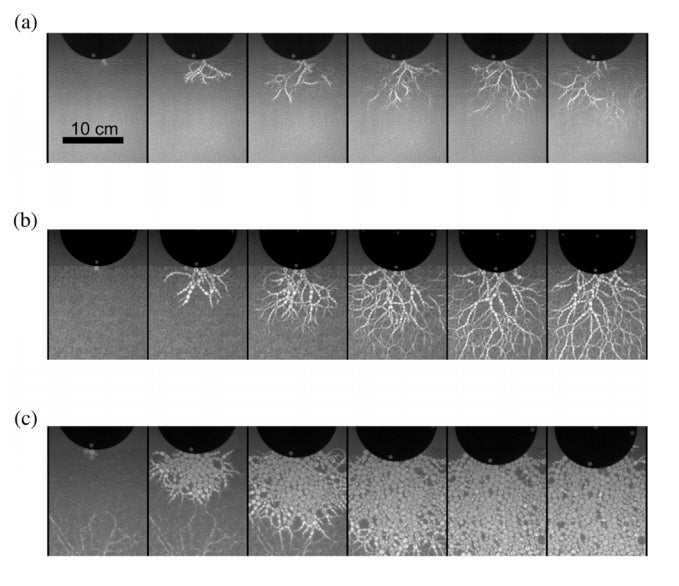 When a missile has been launched, the safest place to be is not in its path. But if one must be where a missile is flying, then the next-best course of action to be far enough underground that the impact is completely absorbed by the dirt above. This isn’t so much practical advice–digging underground bunkers is a slow process and not actually advised in response to an incoming missile–but an actual limitation of how missiles work. Published under the innocuous name of “Nonlinear Force Propagation During Granular Impact” in Physical Review Letters last week, the study shows how granular materials like dirt and soil get stronger when impacted.

With funding in part from the Defense Threat Reduction Agency, researchers Abram Clark, Alec Petersen, and Robert Behringe of Duke University, together with Lou Kondic of the New Jersey Institute of Technology, looked at just how force impacts work on a granular substance, like soil or sand. Using high-speed video and particles that reflect light differently when stressed, they were able to determine the speed and structure of how soil responds to a forceful impact.

To no one’s surprise, the first grains move easily, but as the object pushes deeper, the grains become more densely compacted and resist the impact in a much, much stronger way. When there’s room to do so, particles will move out of the way of the impact, but as they get compressed denser and denser, the once-loose soil becomes a much stiffer, resistant material. That’s not totally surprising; people have been building bomb shelters underground for decades, but the exact equations of how sand resists forceful impacts sheds further light on why it’s a good idea.

What does this have to do with missiles? The Defense Threat Reduction Agency’s mandate is to protect America against weapons of mass destruction. While that job may seem defensive, there are reasons the DTRA would want to know how to get at bunkers deep underground. Iran has nuclear centrifuges at the Fordow site under a mountain, and while the current negotiations are set to remove most of the centrifuges from the site and keep Iran from building a nuclear weapon, the possibility that they or another country may develop nukes in an underground bunker is enough for the United States to want to find a way to get to it. Understanding how the ground is so good at protecting against missiles is the first step to designing new missiles better at punching through the ground.