Phone Flies A Drone With Its Own Internal Camera 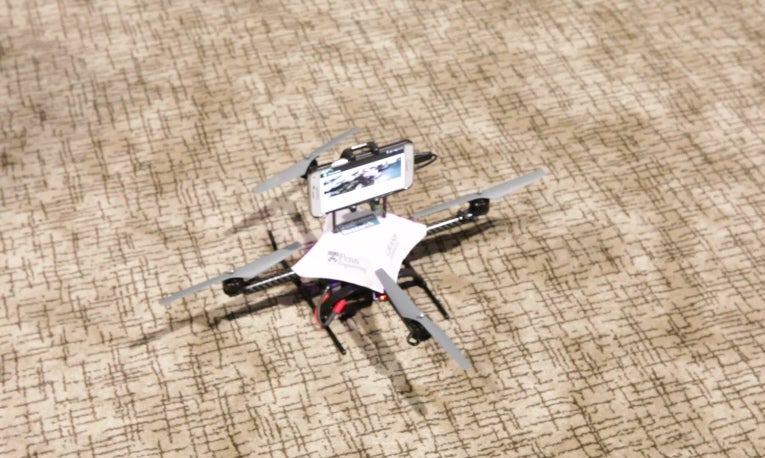 In terms of hardware, function, and ability, a simple enough commercial drone is often little more than a cell phone with wings (or rotors, as the case may be). Small drones especially have more in common with smartphones than their more iconic, larger military brethren. At their heart, they both have a small computer that connects to other devices, can load software, have a few sensors, take advantage of modern, powerful batteries, and often come with cameras. In many ways, the computer inside a small drone might as well be a smartphone.

Now, using a drone skeleton body with a smartphone strapped in, a collaboration between the robotics lab at the University of Pennsylvania and Qualcomm makes the quip literally true.

UPenn and Qualcomm have combined drone and phone before, showing off a system earlier this year that used the android smartphone’s electronics and software to fly. Between accelerometers, GPS, and gyroscopes, phones already contain a wealth of sensors that are as useful for calculating the distance traveled in a pocket as they are for providing navigational information for drones.

Now, as a new video over at IEEE Spectrum demonstrates, it’s possible for the drone to use the phone camera itself to steer from visual input. The piloting all comes from an app installed on the phone, and if the winds of the future are favorable, it means hobbyists might soon substitute smartphones for other hardware at the heart of their drones. And if the winds are too strong, here’s hoping they have a good roaming plan.