Pentagon Budgets For The Next Fighter Generation 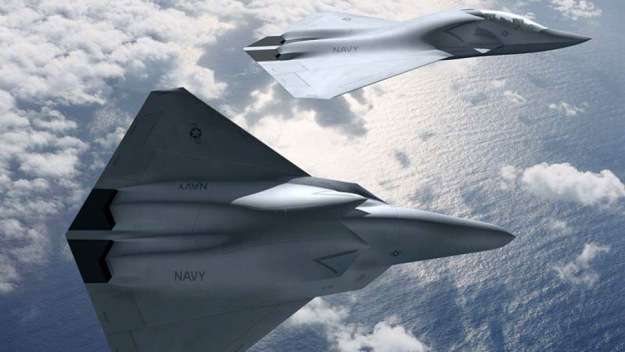 The gestational period of a fighter is sometimes decades. The F-35, which is expected to enter service in 2019, first started development in 1997. Generations don’t always take as long as human humans. The F-18, a major success by Pentagon acquisition standards, took just a decade to go from an existing prototype in the 1970s to a working fighter in the 1980s, but that’s an outlier. For the sixth generation, the Department of Defense hopes to split the difference and get them flying and ready to go by the 2030s.

DARPA is already working on this future. In their “Air Dominance Initiative,” the advanced research projects agency is looking not just at specific technologies, like stealth or vectored engines, but at systems that work together to make a better fighter. These systems include the planned hunting packs of drones that the fighter may very well fight alongside.

America is hardly alone in decided the shape of future warplanes. For decades, Russian and American innovation competed, first in the skies above Korea and then later Vietnam. Straight-wing first-generation fighters were outmaneuvered by swept-wing competitors. The early gunfighting second generation jets made right after the Korean war found themselves in missile fights against the more advanced 3rd generation. While air-to-air combat is increasingly rare, the same cycle of design and competition continues. In future aerial battlefields, America’s F-22s and F-35s might have to contend with China’s own fifth generation J31 fighter or Russia’s T-50. These planes are all expected to serve for decades until, kicking afterburner and screaming into the sky, the sixth generation arrives dominate future skies, maybe even with onboard artificial intelligence.