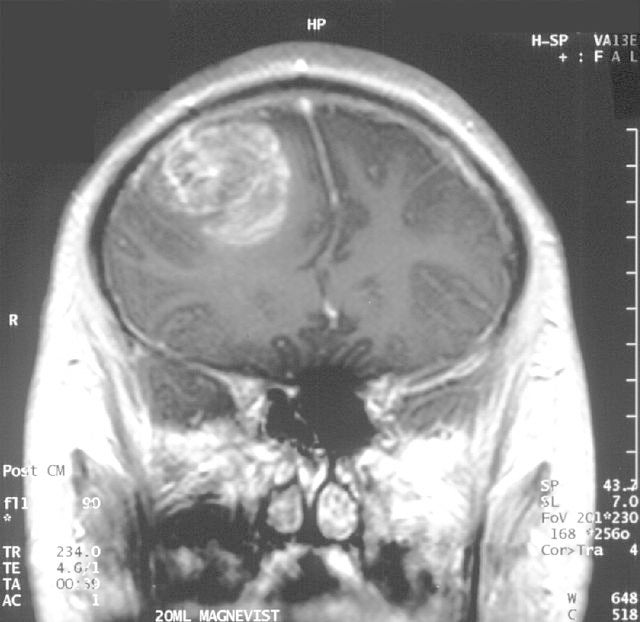 Brain surgery is notoriously complicated. Before surgeons go in to remove a tumor, they study the size and location of the tumor. But once they’re in, they have to rely on their fingers and eyes to distinguish tumor cells from healthy brain cells. Now researchers have developed a “paint” that can be injected into a patient’s veins to make tumor cells glow. After a number of successful studies in mice and dogs, the paint is now being tested in humans in California.

The paint is made from two chemicals. The first is chlorotoxin, a protein derived from scorpion venom, which targets the chloride receptors on the surface of tumor cells. The protein carries a second, non-toxic chemical that makes the cells fluoresce when they are exposed to near-infrared light.

Tests at this early stage are designed to make sure that the paint works as it’s supposed to, and initial results have been promising. Researchers injected the tumor paint into the patients’ veins and it was successfully able to cross the blood-brain barrier, which protects the brain from harmful chemicals that might be in the blood. The first few test subjects had tumors that were deep in the brain, so the surgeons had to remove a piece of the tissue before shining a light on it. “[T]he question was, ‘Does it glow?’ And when we saw that it glows, it was just one of those moments…’Wow, this works,'” Chirag Patil, one of the researchers behind the test at Cedars Sinai Medical Center in Los Angeles, told NPR.

The paint may also be used for other types of tumors in the future.

Ideally, doctors wouldn’t be using surgery at all to eliminate tumors–it’s still a “crude” technique, as one researcher said. But while surgery is still a standard treatment, tumor paint could help surgeons be much more precise. 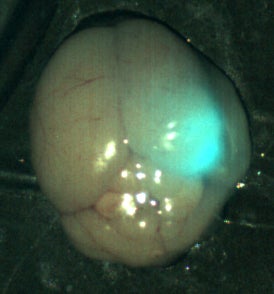 A tumor glows thanks to tumor paint in a mouse brain.

An image of a mouse brain tumor under near-infrared light. The blue-green glow in the upper right quadrant is the tumor, labeled with tumor paint.
Cancer
Diseases