What is happening with the Oroville Dam spillway? 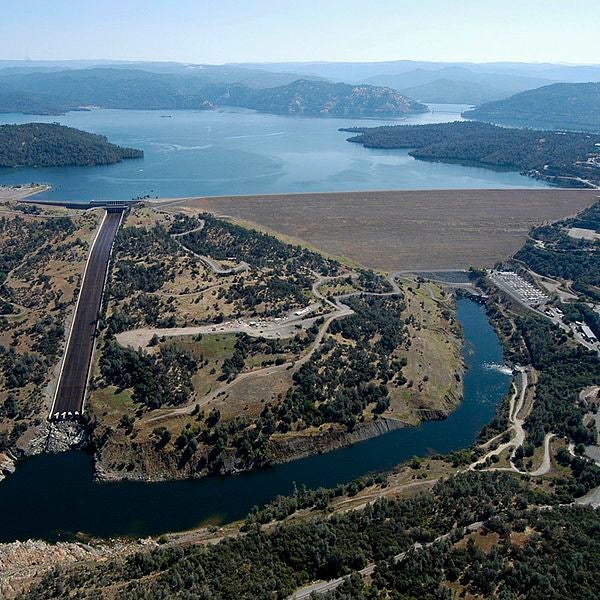 Update, Feb. 15: This piece been updated to reflect additional information released since its original publication.

On Sunday more than 200,000 people were evacuated from the area surrounding California’s Oroville damn. After weeks of storms, authorities feared that a never-before-used emergency system in place to direct excess water – that is water beyond the capacity of the system’s reservoir to hold – would fail. On Feb. 14, the evacuation order was lifted. But here’s what went down, and why the region isn’t totally in the clear.

Last week, a sinkhole formed in the middle of the reservoir’s spillway, or the paved pathway meant to handle the lake’s overflow. This sinkhole measures roughly 250 feet long, 170 feet wide, and 40-50 feet deep—it’s as long as a Manhattan city block, as wide as a football field, and as deep as the deep end of six Olympic-sized pools stacked on top of each other. Needless to say, it’s not an easy fix. Officials are stating that proper repairs can’t begin until the dry season.

Under normal circumstances this wouldn’t be a problem. The spillway is only used when Lake Oroville, which is north of Sacramento and East of Chico, is at capacity. The goal of the spillway is to stop “uncontrolled water releases.” Said another way: the spillway is supposed to stop the lake from spilling willy nilly onto the communities and farms below. But after years of drought, the recent weeks of heavy precipitation mean many parts of California are now awash in more water than its infrastructure can handle.

Over the weekend, the situation became dire. Lake Oroville reached 100-percent capacity—148-percent of its historical capacity on this date. To get a sense of how much water is at play, it helps to understand that the Oroville Dam is the tallest dam in the United States. It stands 40-feet taller than the Hoover Dam.

In an interview with the Sacramento Bee Joe Countryman, a former engineer with the U.S. Army Corps of Engineers and member of the Central Valley Flood Protection Board, noted that if the emergency spillway failed that much of the area around Highway 70 will disappear as well. The dam supplies water to the Central Valley – which grows the bulk of U.S. fruits and veggies which suggests the effects of a failure would be felt far outside of California. Twelve years ago, three environmental groups – Sierra Club, Friends of the River, and the South Youba Citizens League filed a motion with the federal government warning that the earthen emergency spillway might collapse under heavy rains reported the Mercury News. Officials ignored the warning. More storms are expected to arrive on Thursday. In the meantime workers have been scrambling to fill the sinkhole on the main spillway with rocks and sandbags to act as a temporary patch so they can send more water down it, both reducing the amount of water in Lake Oroville and halting the flow of water on the emergency spillway.

They were able to stabilize the main spillway enough to send small, controlled releases down it, lowering the level of Lake Oroville from 100% capacity to 92-percent capacity where it currently stands. While the level is lower it’s still at 137-percent of historical levels.

To get a feel for the scale and influence of the Oroville Dam, we pulled a story from our September 1972 issue about how the engineering marvel brought water to a region short on it. You can read it below.

Surplus water from the north now flows to arid regions via this gigantic $2.3 billion project

From a cliff edge high in California’s Tehachapi Mountains, the parched terrain of the southern San Joaquin Valley stretches out before you. There, one hot noonday, I scanned the V-shaped concrete aqueduct I had followed some 300 miles from the state’s water rich north. The Canal promises new life for this water hungry valley and the densely populated land to the south.

Far below me, at the A.D. Edmonston Pumping Plant, huge pumps were overcoming the last water-flow barrier north of Los Angeles: A gigantic water column 12 ½ to 14 feet in diameter was being rammed 1970 feet up the mountain. The water would then cross the Tehachapis, which are ridden with active earthquake faults, for distribution to the reservoirs in arid Southern California.

Both the California Aqueduct and the engineering marvels for the Tehachapi crossing are major elements of the California State Water Project conceived some 25-years ago. Now in limited operation – with portions still under design and construction – the project won this year’s American Society of Civil Engineers Outstanding Achievement Award. Among its superlatives when completed:

Not only does the project assure a firm supply of quality water, it provides flood control in winter and spring, clean hydroelectric power, recreational sites readily available to urban areas, and improved fish and wildlife habitats through water management.

It all begins in the northern section of the state. There, winter rains and runoffs from the Sierra Nevada Mountain snowpacks fill reservoirs on three forks of the Feather River, flowing into Lake Oroville basin. In summer and fall, water stored at Oroville is released to supply downstate demands. Spilloff at Oroville Dam generates electricity at the underground Edward Hyatt Powerplant, and, at night during off-peak power use, surplus electric power runs pumps that store additional water in Thermolito Afterbay. During peak electrical demand, water is released to furnish inexpensive energy.

Most of the time, a regulated flow from the Feather River’s main branch moves into the Sacramento River, then to San Francisco Bay and out to sea. But at a pumping plant on the Sacramento Delta, surplus water is raised 213 feet above sea level to the beginning of the California Aqueduct – a wide V channel that can accommodate more than 10,000 cubic feet of water flow per second.

Once in the aqueduct, water runs by gravity to other plumbing plants where the level is eventually boosted 3480 feet above sea level. Miniature pumping plants diver water to local districts and private users.

Monitoring at central control. Responsibility for this automation is divided among control centers at five major field divisions. In addition, the project control center monitors and logs all operational data, develops overall system water and power schedules, and coordinates operations of individual centers.

The scope of the Water Project is awesome; nowhere is the sheer complexity of the effort more evident than at the Edmonston Plumbing Plant. My guide there was engineer Bill Curry from the San Joaquin field division.

The swept swings of the pump building encompass a deep pool into which the aqueduct flows. Water is drawn into each wing of the plant through separate intakes and past steal trash racks that screen out debris. A six-bay electrical switchyard receives 230,000-volt power from all four California suppliers.

When I visited the plant, only three motor-pump combinations were fully operational. Eleven pumps of the stations maximum 14 have been contracted for to meet future demands. One pump runs all day; two others go online at nigh to utilize cheaper electrical power. Similarly, while the evacuation order has been lifted that’s contingent on the water levels at Lake Oroville remaining lower. It’s supposed to start raining on Thursday and through the weekend.

The pumping plant itself, with concrete walls six or 12-feet thick, is like an iceberg – what’s visible at the surface is a small part of what’s underneath. When Curry and I entered the top observation gallery, men far below us were stacking individual rotor plates of another motor. A portable oven would later be placed over the stack to achieve the 1/20,000-inch sweat fit that holds it to the main shaft. The second floor provides access to the pump-motor coupling; the third contains the sealed compartments for each electric motor. As I opened a compartment door I felt my ears pop at the sound: over 100db produced by the 80,000-hp Westinghouse synchronous motor. The motor is directly coupled just above the pump. Each pump-motor combination towers 65 feet and totals 420tons.

To prevent a potential brownout when starting each motor, one of two motor-generation (MG) sets is put on the line first. Then, outside power is removed and the MG set is connected to the pump-motor. When the units lock together at 120 rpm, the MG set is reconnected to the utility-system power supply and both units brought up to 600rpm. The MG set is then used to start the next motor at a rate of one every six minutes.

While the operation of the Water Project appears relatively smooth, getting this far hasn’t been all clear sailing. Animals are constantly falling into the aqueduct and even the romantic tumbleweed clogs up trash racks to seriously impede water flow.

Most setbacks involving the human element initiate some ingenious countermeasures. Once a discharge valve arrived with a large crack because water trapped in a lower cavity after testing had frozen during shipment. Later valves were designed with drainage holes.

Valve failure and labor walkoffs. Bill Curry relates a near tragedy caused by poor design on the drainage valve for the Edmonston discharge lines. Back pressure of 800psi – enough to cut a man in half – is reduce to 50psi in the operation. But, when the valve was tested the surge proved too great. The pip leading back into the pumping pool whipped out of the concrete wall and burst, showering everyone in the lower vault with water. Fortunately, no one was near enough to be injured.

Labor disputes also have presented problems. In fact, just as I was preparing to leave Southern California I was told some workers were planning to walk off the job.

Don McKillup, chief program liaison control officer, was quick to remind me of Murphy’s law: Anything that can go wrong will go wrong.

Says McKillup: “It’s hard to believe that NASA made it to the moon with all the trouble we on the Water Project have had.” But he happily conceded that despite every setback, they are close to making all schedules.

Next year, by the time of its first-phase completion, the California Water Project will be routinely redistributing water to the southern two-thirds of the state, where 60 percent of the need is. The country’s first statewide water, at a completion of $2.3 billion, will help slake California’s thirst well into the 21st century.