Only One Artist Can Use Blackest Material In The World

But science has no limit 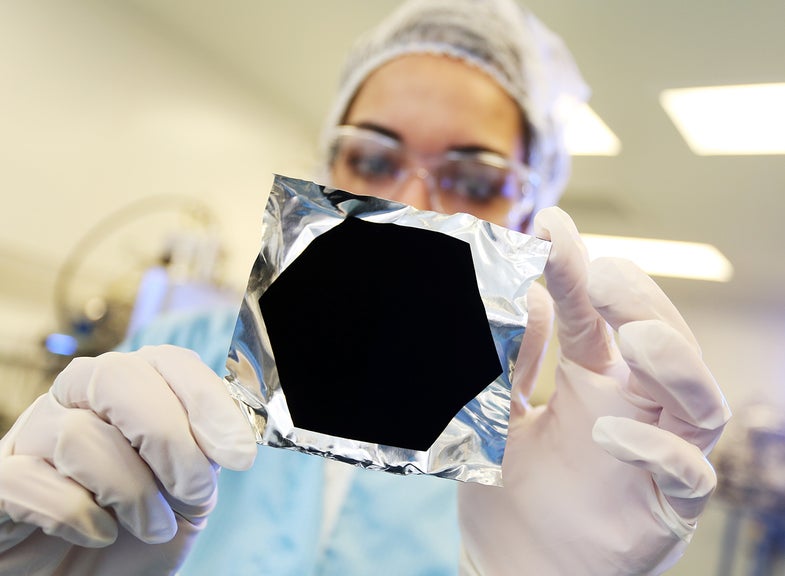 Just call it the dark ages. The latest controversy in the art world is a furor over the darkest material ever created.

In 2014, Surrey NanoSystems announced that it had created Vantablack, a “forest” of nanotubes that can be grown on an aluminum base. It is the darkest material ever, absorbing so much light that it can fool the eye into seeing a smooth surface on a crumpled sheet of aluminum foil, something like this:

It’s really neat, but many artists are furious that the exclusive rights to use the ultra-black material in art have been given to Anish Kapoor a sculptor.

Surrey NanoSystems is restricting the use of Vantablack in art, but not other areas, citing the difficulty of actually using the material, and their basic desire not to deal with the customs headache of exporting it from the UK. Vantablack is not a paint or a pigment, as Surrey NanoSystems points out in their FAQ’s :

While artists might disagree with the idea that a nanotech company gets to decide what is “generally not suitable for use in art”, Surrey NanoSystems is not restricting the use of Vantablack entirely. Their decree presumably means that the company could license it’s use in products like space-based telescopes and cameras. Vantablack’s unique ability to absorb 99.965 percent of visible light and 99.85 percent of infrared radiation means that it can prevent unwanted light from reaching a camera sensor, an incredibly valuable trait in space, where researchers are trying to capture faint light from distant stars.

This loophole could potentially also allow Vantablack’s continued use in commercial products, like the single can of Lynx body spray which Surrey NanoSystems coated in Vantablack. It took 400 hours to coat the single can of body spray in Vantablack, making it impractical for mainstream use for now. The labor intensive work of not-art went on display to the public in Shoreditch last summer, and was part of this ad video.

Clearly, the answer to all artists who want to work with the coating? Simply sign up to work with a scientist or an ad agency. Just don’t call it art.