They have nukes and missiles, now they need to combine them 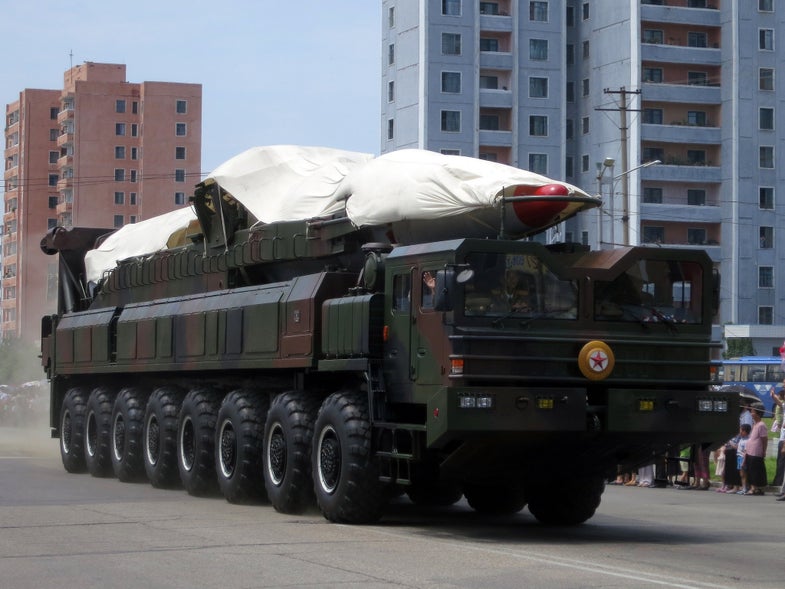 Launching a ballistic missile is a solved problem. It was first solved in World War II, when German V-2 rockets flew over 220 miles to rain death on the United Kingdom. During the Cold War, the potential to deliver a nuclear attack with a missile fired from one side of the globe to another led to an arms race, a massive nuclear stockpile, and the category of Intercontinental Ballistic Missiles, or ICBMs. Building an ICBM is also a solved problem, requiring the expertise to make a nuclear warhead and to build a missile body that can effectively deliver it.

This is all to preface a simple, grim possibility. North Korea, a totalitarian dictatorship and the only country to test nuclear warheads this century, might only be five or so years away from building working, nuclear-tipped ICMBs of their own.

North Korea may not be limited to land-launched ballistic missiles. In August, a North Korean submarine launched missile traveled over 300 miles. While that’s still an order of magnitude shorter than the thousands of miles of range for an intercontinental ballistic missile, submarines can conceal themselves at sea, making the attacks a lot harder to detect until they happen.

North Korea does not yet have the ability to launch a nuclear-tipped missile against targets in the mainland United States. What they have right now are missiles–some that appear to work–and nuclear warheads, which may or may not fit on top of those missiles. Pyongyang still has work to do to prove that this is a real threat. Yet that work, it appears, is getting done. Just last week, North Korea tested another nuclear warhead. August’s successful submarine missile launch followed a series of earlier, unsuccessful tests starting in December 2015.

This is not new science, and it doesn’t take unknown discoveries to make it happen. ICBMs are a solved problem, and North Korea is iterating its way to an answer.