Why whales are back in New York City

The Cetaceans are back in town. 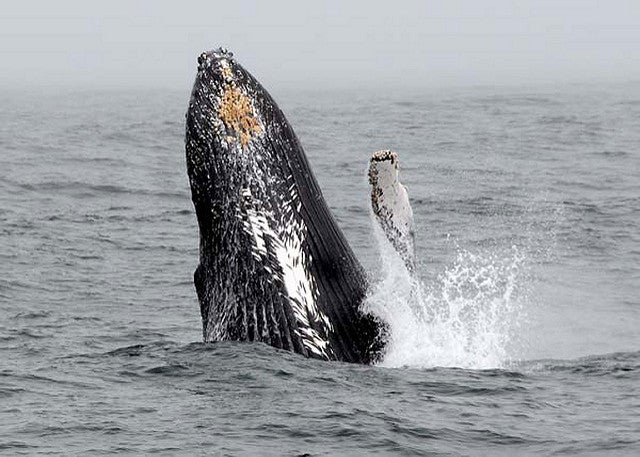 This picture of a humpback whale breaching was taken in California, but whales like it are increasingly found in the waters off of New York City. NOAA
SHARE

It is a perfect June day. After seemingly weeks of rainy gray skies, an early morning shower has given way to sunshine. White, puffy cumulus clouds hang in the sky, still, as if doodled onto the blue background. Despite the fact that the waters along this stretch of the Atlantic ordinarily tend more towards a grim gray (it’s supposed to be that color, one reassures themselves) today the water is practically Caribbean green, tiptoeing towards turquoise. I am on a boat, a white 95-foot double decker aluminum cruising vessel zooming across the New York bight—an indentation along the Atlantic Coast which makes New York City especially prone to storm surges like those that accompanied Hurricane Sandy. But we’re not hunting storms: we’re stalking whales.

For the first time in a century, humpback whales have returned to the waters of New York harbor. And not just occasionally, either. They’re coming in enough numbers that a company can reliably trot tourists out to the ocean—within sight distance of Manhattan’s skyscrapers—to see them.

“Because of the improvement of the water quality, algae and zooplankton have multiplied, giving good food for the menhaden [a small oily forager fish beloved by whales], which have returned in numbers that the fishermen say they have not seen in their lifetimes,” Paul L. Sieswerda told PopSci. Once a curator at the New York Aquarium, Sieswerda has since founded Gotham Whales, an organization that conducts tours and monitors the presence of whales, seals, and dolphins in NYC. “Our surveys show an exponential increase in the number of whales since 2011 when we first began our studies,” he said. “Prior to that, whales were only seen intermittently.”

While Sieswerda dates the presence of whales back to 2011, 2014 was the year that whales caught the attention of many New Yorkers: one especially charismatic whale was captured on camera. A humpback seamlessly parted the water’s surface, maneuvering its forty-foot, forty-ton form so that it was floating perfectly erect. Although its tail stayed below the surface, its rostrum (or beak-like snout) and head stood proudly exposed. The incredible power and buoyancy of its pectoral fins kept it aloft in a slow and controlled motion that bore a striking visual similarity to a person treading water. Whales use this motion, called spyhopping, to get a better view of what’s on the surface—like prey, or humans gawking at them from whale watching boats. This is a marvel to behold anywhere in the world; to see it in New York City, with the Empire State building glimmering in the background, borders on the fantastical.

It’s no wonder the image went viral on social media, thrusting urban whales into the spotlight.

Once all but extinct in New York City’s waters, the whales are undeniably back. The same year that the curious humpback captured our attentions, Sieswerda counted 106 whales in the waters off New York City. In November, a whale was caught swimming near the Statue of Liberty. And it’s not just whales: dolphins and seals have also come along for the ride. It’s shocking to longtime New Yorkers, who remember when the city’s rivers and beaches were an ecological punchline.

When I spot the whales for myself, I cannot contain my enthusiasm. My whale watching companion, who hails from Massachusetts, is markedly less enthused by the three whales—two adults and one youngster—that we see on our four-hour journey. In Massachusetts, she says, the whales are more active. The ones we watch just barely skirt the surface. But as someone who grew up here—and was banned from heading to the beaches because of safety concerns—I never thought that one day my city would consider any sort of whale to be ordinary.

“… kids of my generation knew only three things about the Hudson,” writes John Cronin in “The Riverkeepers”, a book about early efforts to clean up the Hudson. “It was the boundary between New York and New Jersey, the dark, vertical Palisades on the opposite shore got their name from an amusement park that sat atop them; and the waters of the river were too polluted for swimming.”

Cronin was born in 1950, and was one of the first generations of New Yorkers forcibly removed from the ecosystem that birthed it. It may be odd to think of New York—or any city—as part of an ecosystem, but as much as NYC has a reputation of being a concrete jungle, that’s only ever been half true. Even today, foxes roam Central Park, possums terrorize toddlers in Brooklyn, and Queens residents know to keep trash cans firmly fastened to keep out raccoons. Meanwhile, hawks make their nests atop the city’s bridges and skyscrapers. There are even some old timers who have managed to spend all of their lives foraging for pokeweed and fishing for flounder, fluke, striped bass, perch and porgy in the city’s rivers. With some exceptions, the fish are once again safe to eat these days. But when Cronin came of age, the Hudson River was a hard stop. The city’s waterways were a no-go zone.

The Hudson River (along with the city’s Bronx and East Rivers) matter because they feed the surrounding ocean: what we dump in one ends up in the other. And the Hudson isn’t just a river. It’s a tidal estuary, which loosely means that it flows both ways. The estuary feels the ocean’s pulse for 153 miles of its total 315, which means it has, on average, four tides a day. The ocean flows up, and then back down.

Back in Cronin’s youth, the color of the Hudson’s waters shifted with the whims of the car-buying public—General Motors poured its waste paint directly into the river, so you could tell what hue was popular based on the river’s current tint. Between 1947 and 1977, the year the Clean Water Act was enacted, General Electric—based upriver from New York City—dumped an estimated 1.3 million pounds of polychlorinated biphenyls (PCBs) into the Hudson. According to the EPA, in addition to causing cancer PCBs can have a wide range of harmful immunological, reproductive, and neurological effects.

Meanwhile, the nearby Bronx River was bluntly called an open sewer. In the early days of its clean-up, as many as 89 cars were hauled out of the city’s only freshwater river. The East River, which separates Manhattan from Brooklyn and Queens, was best known as a dumping ground for city sewage (and the bodies of mob murder victims). In the 1980’s, medical waste—including hypodermic needles that would eventually be tracked to Staten Island’s Fresh Kills Landfill—washed onto the region’s beaches.

But today, it isn’t just whales that grace New York’s waterways; humans—live ones—willingly dip themselves into the East River for any number of reasons. Each year, thousands of athletes jump in as part of the annual Hudson River triathlon, while the Manhattan Kayaking Company offers stand-up paddle board lessons for $75 dollar for 1.5 hours and basic kayak instruction at $75 dollars for two hours. In fact, city-dwellers who don’t need lessons can actually loan out kayaks for free at designated spots around the island. And even the most cynical New Yorker frequents the city’s hundreds of miles of greenways, many of which provide not just access to walking and cycling, but views of the waterfronts as well.

To what can we credit this radical shift? For starters there’s legislation, which since the 1960s has shifted to support better management of the city’s—and the nation’s—waterways. Congress Passed the Clean Air Act in 1963 and expanded it in 1970, 1977, and 1990 (air pollution can infiltrate waterways, carried over by dust, rain, or through simple gravity). And on April 22nd, 1970 (the first Earth Day) then-Governor Nelson Rockefeller signed New York’s Environmental Conservation Law, which created the state’s Department of Environmental Conservation. It provided the state with the capacity to administer and regulate the state’s environmental laws. The creation of the Environmental Protection Agency that same year did the same on a federal level. The passage of the Federal Clean Water Act in 1972, and the Federal Safe Drinking Water Act, provided the legislative framework to hold environmental polluters accountable.

Cleaner waterways have lured the fish back, while limits on commercial fishing (in part because some of the fish species are not safe for human consumption, courtesy of the PCBs that still linger in their bodies) give the whales something akin to an all-you-can-eat buffet.

But it’s important to note that although the city’s waterways are cleaner, they’re not perfect. The city is home to not one, but two aquatic superfund sites: Gowanus Canal and Newtown Creek. The city still pours some 27 billion gallons of storm water and raw sewage into many of its waterways every year, legally, due to an antiquated sewage system desperately in need of an overhaul.

“The water, however crappy it is, is our most valuable open space,” says Eymund Diegel, an Urban Planner who works with a consortium of groups to help clean up Brooklyn’s Gowanus Canal. “Let’s make it accessible and clean it again, let’s buy some canoes and provide lessons for kids and get people to reconnect.” The group recently built a boathouse on the Gowanus, and plans to decorate it with circuit boards—old military electronic waste—dredged from the Canal.

Two generations ago, writes Cronin, “My parents had enjoyed a very different relationship with the river when they were young. My father learned to swim in the Hudson, one of a boatload of terror stricken St. Peter’s parish boys who were instructed by Monsignor Brown. The monsignor would tie the stout bowline around the waist of the nearest boy and throw him into the drink with the command, ‘Swim.'”

Maybe we’ll never get back to the day when the youths of New York are sent into the city’s waters during gym class. But the return of the whales is a sign that New York is finally starting to do right by its waterways—and it should encourage the city to do even better.