Those ripples are a normal feature of Daphnis’s orbit 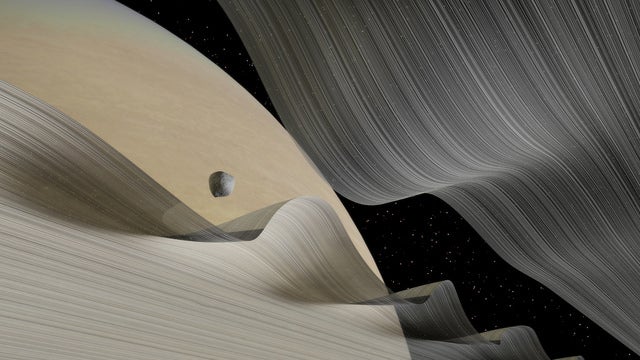 Saturn’s moon Daphnis is only five miles in diameter, but its orbit can still make some waves.

The tiny moon travels within the Keeler Gap, a space about 26 miles wide in Saturn’s A ring, keeping it clear. It also causes the edges of the gap to ripple as it swings past.

Two new visualizations by NASA software engineer Kevin Gill illustrate how this interaction might look. “This is one of the many aspects of the Saturn system that I imagine would be absolutely breathtaking if you could see it in person,” Gill told Universe Today.

The illustrations, titled “Daphnis in the Keeler Gap” and “Daphnis and Waves Along the Keeler Gap“, were inspired by images from NASA’s Cassini spacecraft, he said. Recently, Gill has also illustrated a valley on the surface of Mars.