See The Most Sophisticated Mind-Controlled Robot Arm Yet 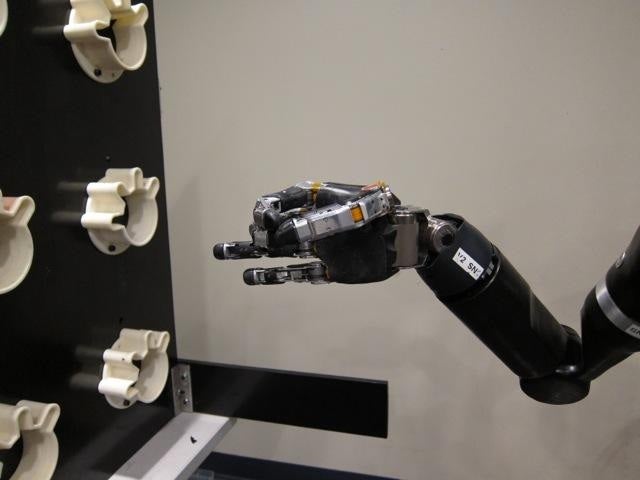 In 2012, 53-year-old Jan Scheuermann demonstrated for researchers that she could move around blocks, dowels, a ball, and even a bar of chocolate. She did it all with a robotic arm she controlled with her thoughts.

Scheuermann, now 55, has a neurodegenerative condition that’s paralyzed her from the neck down since 2003. In 2012, she volunteered to receive a four-millimeter-square implant in her brain that would allow her to test this arm, in a study led by researchers at the University of Pittsburgh. That same year, the researchers published a scientific paper and video about their—and her—success with the arm.

Today, the team is publishing another video, plus a paper in the Journal of Neural Engineering. This time, the arm is more controllable than ever. It moves in 10 directions, compared to the original arm’s seven. The added directions allow Scheuermann to move the robot fingers and thumb in new ways, so she can grasp objects more precisely. You can see her at work in the video below.

The hand is still far from being ready for most people to use. But the team’s progress helps them learn the basics to get them ready for patients, including what neurons control what movements, and how to best train people to control robots with their brains.