The compounds defeated the parasite at all stages of its lifecycle 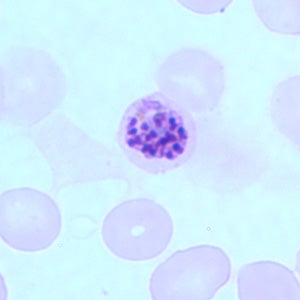 P. falciparum, the most lethal malaria-causing parasite, in a blood smear. CDC
SHARE

Researchers have discovered several compounds that can cure mice of malaria in a single dose. The new treatment is effective against malaria-causing parasites in all stages of development, scientists reported September 7 in Nature.

“Our findings identify compounds with the potential to cure and prevent transmission of the disease as well as protect populations at risk, all in a single oral treatment,” coauthors Nobutaka Kato and Eamon Comer, of the Broad Institute of Harvard and MIT, told ResearchGate.

An estimated 438,000 people died from malaria worldwide in 2015. After the disease is transmitted to people, the parasites invade and multiply in the liver, then in the blood. Most antimalarial drugs target this blood stage of the parasites’ lifecycle, which is also when symptoms appear.

As malaria parasites develop resistance to existing drugs, researchers have been looking for new treatments. Kato, Comer and colleagues screened more than 100,000 molecules against a strain of Plasmodium falciparum, the most lethal malaria-causing parasite in humans. They focused on compounds that would be effective against multiple life stages of P. falciparum, and found three clusters that attacked the parasite in similar ways to drugs currently in use.

A fourth group of compounds blocked an enzyme that previous treatments haven’t targeted, which may make them less susceptible to resistance. A single dose of these compounds, called bicylic azetidines, left mice infected with P. falciparum or another species, P. berghei, parasite-free for 30 days.

In the future, the team will investigate whether these compounds are safe and effective in people, and hope to begin clinical trials within four years. A treatment for malaria that works in a single dose is especially appealing because it could be easier and cheaper to use than drugs that people must take repeatedly.

Though the researchers zeroed in on just a handful of molecules that were effective against malaria, others may still lurk in the 100,000-compound library. The team has made the chemical structures for these compounds and data from their investigations available at the Malaria Therapeutics Response Portal.

“We invite the scientific community to use this database as a jumping off point for their work developing antimalarial therapies,” coauthor Stuart Schreiber, of the Broad Institute, said in a statement.