A New Material Can Fold And Build Itself 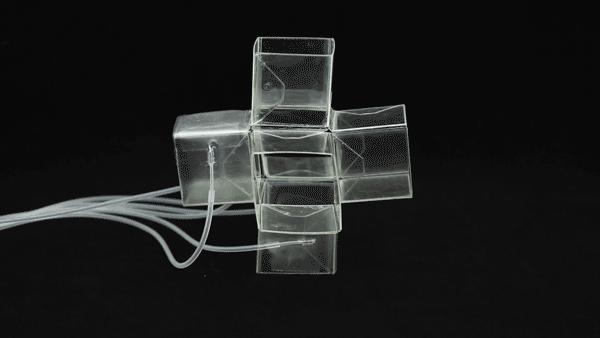 Imagine a future where pesky flat-packed furniture could just assemble itself. Well, that’s a future scenario that we can glimpse today. In a study published in Nature Communications, researchers from Harvard describe a new type of bending and folding mechanical metamaterial–materials made to have properties that don’t occur naturally.

The artificial material is inspired by a method of origami called snapology. Using this way of folding ribbons of paper into geometric structures, the team was able to build a complex shape using small cubic units. At the side hinges of each unit, they added a little air pocket, which serves as the pneumatic actuator, the device that converts energy into motion or movement.

By programming the actuator ahead of time, the structure becomes a self-sufficient material that can fold down into a flat piece for transport, and then pop back up into a 3D structure when it arrives at its destination, or it could use its deforming capabilities to better adapt to its environment.

For the study, the researchers tested the concept using a tiny model on the centimeter scale, but they say that the design is scalable and could be easily adapted for both micro- and nano-scale applications, or up to the meter-scale. That means applications could be vast and versatile from something as small as a surgical stent, to as large as an emergency shelter for disaster relief or a structure that could be deployed into space.

“This structural system has fascinating implications for dynamic architecture including portable shelters, adaptive building facades and retractable roofs,” one of the study authors Chuck Hoberman said in a press release. See the metamaterial’s folding abilities in action in the video below.