Bulb Eats Own Light To Amp Up Efficiency

Creating a warm glow without all the waste heat 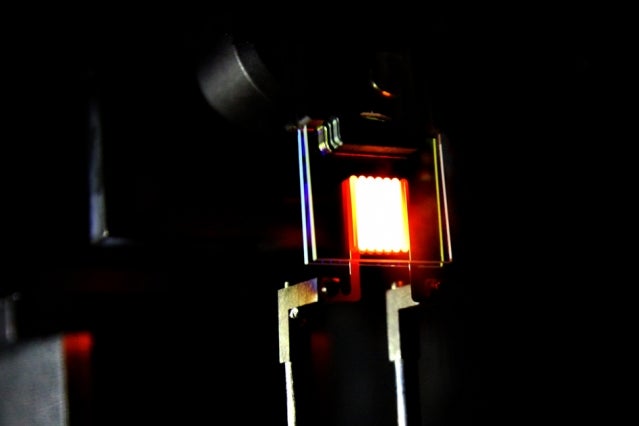 When it comes to lighting, staying cool is the hot trend. Lights that give off less heat use less energy, and many (like LEDs or fluorescent bulbs) last longer than traditional incandescent bulbs, making them ideal substitutes for our energy-conscious world.

The problem is that incandescent bulbs, which have been around since before Edison, give off a cozy, warm glow, making them appealing in ways that harsh fluorescent lights just aren’t. LEDs have been making some inroads, but a lot of people still prefer incandescent bulbs even though a lot of the energy that flows into the bulb gets wasted as heat instead of light. The temperature of a lightbulb’s tungsten filament (the wire you can see through the glass) can reach 4,940 degrees Fahrenheit.

In a paper published today in Nature Nanotechnology, researchers from MIT announce that they may have solved this old problem.

The researchers created a bulb that still had an incandescent filament in the center, but was surrounded with a new kind of crystal filter that sits around the filament. The filter allowed visible light to pass through, but reflected infrared wavelengths of light (not visible to people) back toward the filament. The infrared light (and the heat that goes with it) is then reabsorbed by the filament, and re-emitted as visible light in a continuous cycle.

The new lightbulb is still a proof-of-concept, so don’t expect to see it on hardware shelves anytime soon. The researchers still have a long way to go to make it viable for consumers, but their prototype is already as energy efficient as some LEDs and fluorescent bulbs currently on the market.