This Video Game Asks: How Would You Survive in a Big City if You Were a Stray Dog? 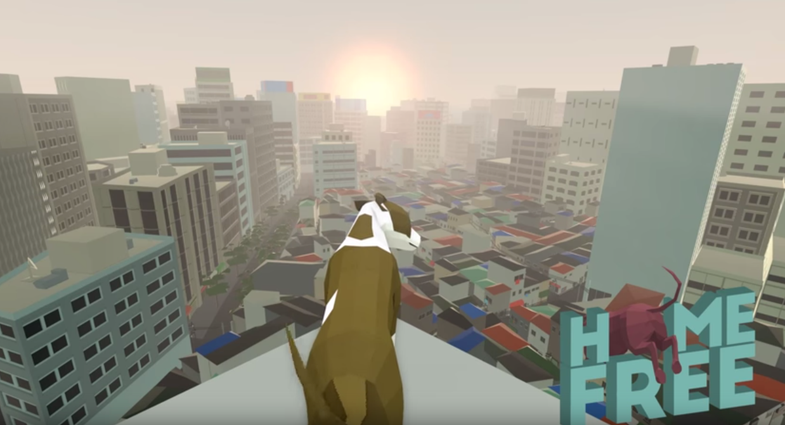 No guns, no swords, no armor: just a lost dog running around a sprawling city, trying to survive. No, it’s not an upcoming Disney film, it’s a proposed video game to work on both Mac and PC systems and is currently raising money on Kickstarter. The game’s creator, Kevin Cancienne, hopes to reach $50,000 by the end of this month, and with about $38.00 raised so far, he’s well on his way.

“Home Free” is the open-world survival game where you’re a homeless dog, roaming the streets. You’ll search for food, avoid cruel humans, and evade meaner, territorial dogs as you try and make it from night to night.

Cancienne wants you to feel many things, but most of all empathy. Here’s how he describes the game world on the Kickstarter page:

And those things will be different every time you play. “Home Free” promises unique experiences in each new game: “Every street, alleyway, building, nook and cranny was generated just for your game. No one has been here before, so you better start marking your territory.”

Territory isn’t the only thing that can change every time you play. Based on the choices you make (steal food, beg for it, befriend other dogs?) you’ll have a different experience each time as well.

Sandbox games of course have some existential problems: At some point you need to know when you’ve won, or when it’s time to quit. We’re not sure from the Kicktstarter page whether the game has an ending, or a goal other than survival.

But if sandbox games aren’t necessarily unexplored territory, dog-as-main character certainly is a refreshing divergence. And stray dog in the big city already comes with a wash of emotions for animal lovers (while it’s typically something you have to build for human characters in a game). It’s already going to be much harder to watch a dog get struck by oncoming traffic than, say, any of the characters to ever have appeared in “Grand Theft Auto”.

It’s also impressive what the creator is accomplishing with gestures: You can tell plenty of the dog’s mood and emotions just from well-captured tail movements and posture. You can check it out for yourself:

We’ve got a while to wait to get to play “Home Free” (it’s expected for 2016), but here’s hoping it delivers on its promises. Maybe there’s a (less exciting) sequel to be found, where you’re a cat tasked with knocking things off counters, seeking out beams of light to nap in, and spending day after day searching for the mysterious red dot.