While the Ehang 184 is quite pricey, Ehang hopes that a mass-production run of its successors would achieve economies of scale, bringing down the price. Ehang
SHARE 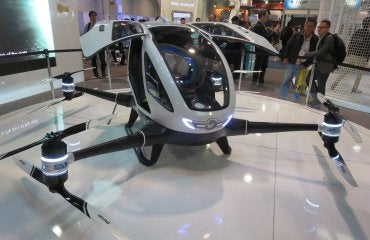 In the bleak desert east of the ocean and west of the mountains, a robot will open up, take a human into its body cavern, and then lift off into the sky. No more than 23 minutes later, the robot will land, and disgorge its human contents. The Ehang 184 is confusingly termed a “passenger drone,” and the remotely piloted people-carrying device is now cleared to test in Nevada.

The drone will test under the supervision of the Nevada Institute for Autonomous Systems, and the Ehang 184 joins the growing tech boom in Nevada. The empty desert holds the hope of hyperloops, drone delivery, autonomous trucking, and drone airports. (Nevada is also famously the home of secret military aircraft testing, and there’s a distant possibility that the Ehang could be adopted into military use.)

While the market for, say, self-driving trucks or drone deliveries is pretty self-explanatory, who wants a helicopter that can’t fly for even a full half hour? The Guardian writes:

To work as a sky taxi, Ehang plans for the drone to fly at an elevation of up to 11,500, at speeds of 63 mph. That’s a lot slower than planes or helicopters normally go, but a similar altitude, which will make it a major hurdle for the FAA and other lawmakers figure out how to work drone taxis into the sky. The drone is all electric, so it will likely have to wait to recharge before flying out again. Fine for depositing drunk billionaires at the helipads near their Vegas penthouse suites, but not really a perfect option for anyone else.