This shifting curb kept track of a California fault 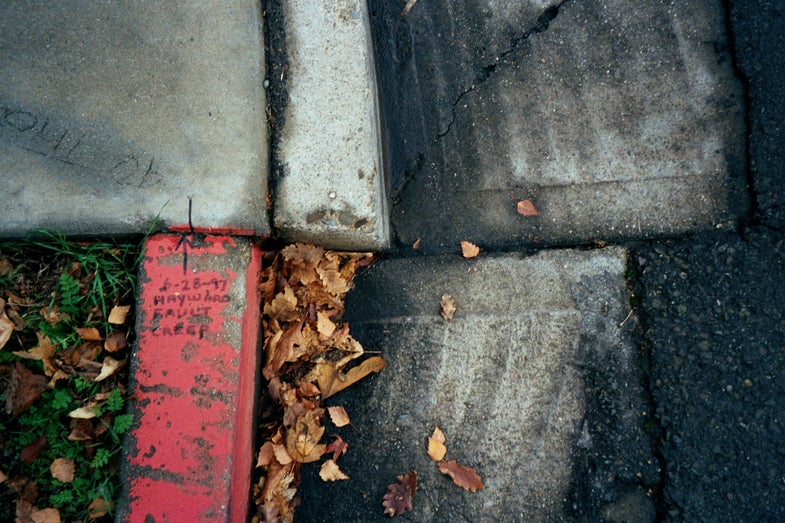 Some scientists are mourning the loss of a curb in California.

Across the bay from San Francisco, in Hayward, there once sat an earthquake scientist’s mecca of sorts; a curb slowly pulled apart by the fault it straddled. City officials did their duty fixing the fault, simultaneously scrapping the valuable data point.

“It really was an iconic location on the Hayward fault,” David Schwartz, a U.S. Geological Survey geologist, told the Los Angeles Times. The Hayward fault is a crack in the earth that travels northwest to southeast beneath the residential area east of the San Francisco Bay including Oakland and Berkeley. It caused a magnitude 6.8 earthquake in October of 1868, killing thirty people in the San Francisco region, according to a paper published by a U.S Geological Survey team in 2008, led by Thomas Brocher.

“The Hayward fault has reached the point where a powerful, damaging quake can be expected at any time,” the report continues.

The curb was a small but jarring reminder of the fault’s presence. Scientists would come and measure the curb as the land on either side of a crack in the curb shifted; lines marked on the curb would diverge an inch or so over the course of a few years. A blog run by Dr. Sue Ellen Hirschfeld catalogues the curb’s movement.

Science writer Andrew Alden first noticed the curb had been removed. Officials in Hayward said that they needed to install a wheelchair ramp at the intersection, according to The Los Angeles Times. The officials didn’t know the cracked curb had any scientific significance, which makes sense. If someone didn’t mow their lawn, you’d probably still assume the house was abandoned, even if the home owners were just measuring how fast the grass grows.

There are other places where the Hayward fault has cracked or warped the built environment, which you can find on Hirschfeld’s blog, but maybe none as obvious as the curb.

This article has been updated to correct the number of deaths in the 1868 Hayward earthquake.