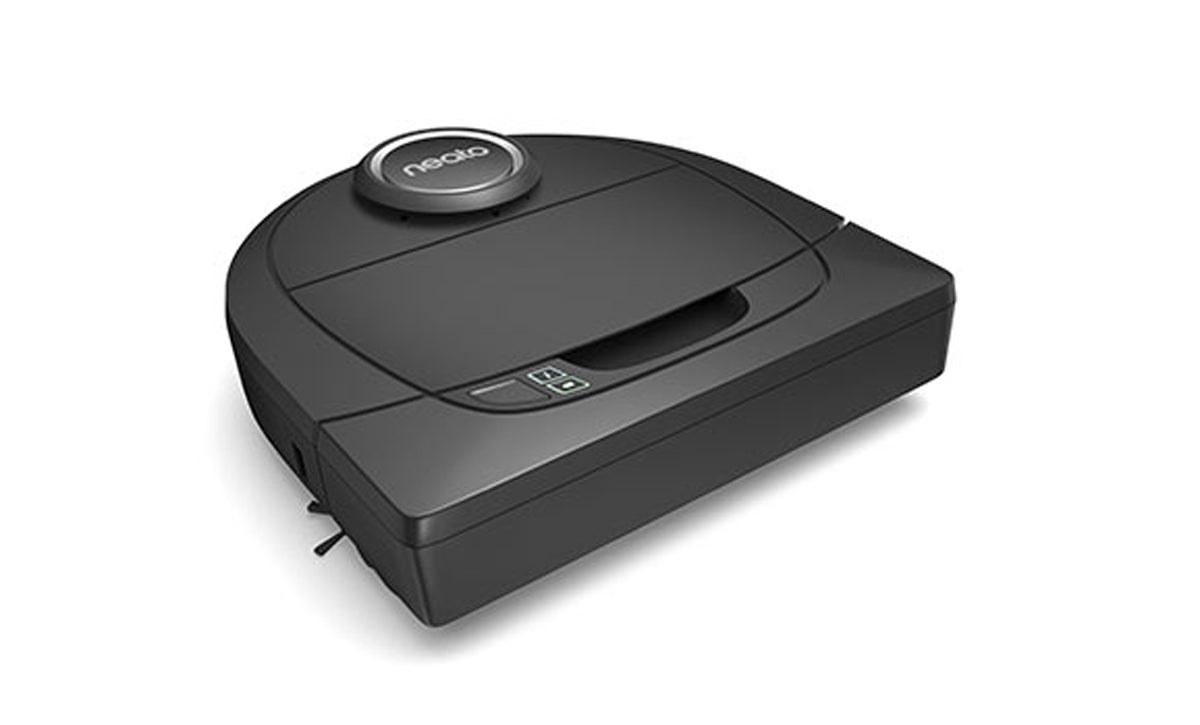 Most robotic vacuums wander aimlessly around your floors, but the Neato Botvac D5 Connected creates a battle plan before setting on its way. A spinning infrared laser navigation system scans and maps the parameters of your room in order to create as thorough a cleaning pattern as possible. It can clean up to 4,500 square feet over the course of three runs, and if its battery runs low, the robovac will recharge itself and then continue its cleaning cycle where it left off.

Like most robovacs these days, there’s not much you need to do to get the D5 up and running. After plugging its charging cradle into an outlet, we placed the D-shaped bot against the cradle’s two metal charging strips and let it juice up. A battery light turns from orange to green once it’s fully charged.

While it’s not mandatory, Neato recommends you finish setting up the D5 using its dedicated app. This entails the usual downloading, account creation, and Wi-Fi connecting and only takes a few minutes. The app lets you do things like set cleaning schedules and pause or start a cleaning from your phone. You also get alerts when the robovac is done cleaning a room.

After everything was charged and ready to go, we set the vacuum loose in our bedroom, kitchen, office, and living room. For comparison purposes, we also recreated our usual obstacle course of filth in our 28 x 15-foot living room. Filled with a combination of hardwood floors and low-pile carpeting, as well as a mixture of furniture—a couch, multiple bookshelves, a coffee table, and credenza—it’s a complicated room to clean with plenty of areas in which a robovac can get stuck. We added our special mixture of flour, rice, dirt, and plenty of short, pointy dog hairs to see how well the vacuum handled them.

The D5 sits in the middle of Neato’s Connected Series of robot vacuums. Unlike the flagship Botvac Connected, it doesn’t let you choose between suction power levels. You also won’t get a cleaning summary coverage map via the app. Other than the inclusion of an LCD screen on the Botvac Connected, the two are very similar.

The first thing we noticed was how methodical and precise the D5 was in its cleaning patterns. When you start the robovac, it moves forward a few inches, pauses, turns on its laser navigation system, and then scans its surroundings by rotating back and forth. It depends on the size of the room, but the bot usually proceeds to clean the perimeter first before moving, row by row in a straight line, to the interior. This is vastly different from other robovacs, which tend to ping pong around a room with no noticeable pattern or strategy.

Another thing we liked? It’s gentle—especially compared to iRobot vacs, which have a tendency to ram into obstacles with considerable force. This may be a result of the D5’s superior mapping skills, but whatever the reason, our wooden sofa legs were grateful.

Scheduling worked fine and was easy to set up in the app. We also like the D5’s larger than average dirt bin, and the option to do two pass-spot cleanings. Unfortunately, we found we had to rely on that option quite a bit due to the D5’s mediocre sucking abilities.

First, the standard disclaimer: Robot vacuums are not deep cleaning tools. They exist to help you prolong the time between those deep cleanings, in fact. You run them two or three times a week to keep things presentable and clean. On wood floors and tile, the D5 managed to pick up most loose dirt and dog hair in its direct path, but it had considerable trouble with corners. A tall coat rack in our room was surrounded with dog hair and the D5 and its spinning side brush managed to suck up hardly any of it. The bot had similar difficulties around the perimeter of our couch and coffee table, leaving quite a bit of debris in its wake.

While it embarked on a more thorough cleaning pattern than many of the other robot vacuums we’ve tested, the D5 also tended to get stuck more often. The raised circular LIDAR turret that protrudes from the top of the vacuum got snagged on multiple pieces of furniture over the course of the two weeks we used it. The robovac also tended to blow through cords and wires and got stuck on a couple occasions behind our credenza. To avoid this you can use the included 13 feet of magnetic boundary tape to cordon off certain areas you don’t want the bot to go, like around a dog bowl or in front of a specific room.

The app was relatively easy to use, but we failed to see much utility in it other than the ability to set cleaning schedules. The push status notifications weren’t particularly helpful (do people really care when their robovacs are done cleaning?), and we never got the urge to randomly start cleaning while away from home. If the D5 was still going for its original $600, these flaws would be a bit more upsetting, but given you get it for at least $100 off at most places, they’re somewhat more palatable.

Conclusion The D5 undercuts its admirable navigation skills with sub-optimal sucking. If your home or apartment has a fairly open floor plan and lots and hardwood or tiled floors, this robovac is a solid choice. If not, there are better options.