On court body positioning is far from accidental. 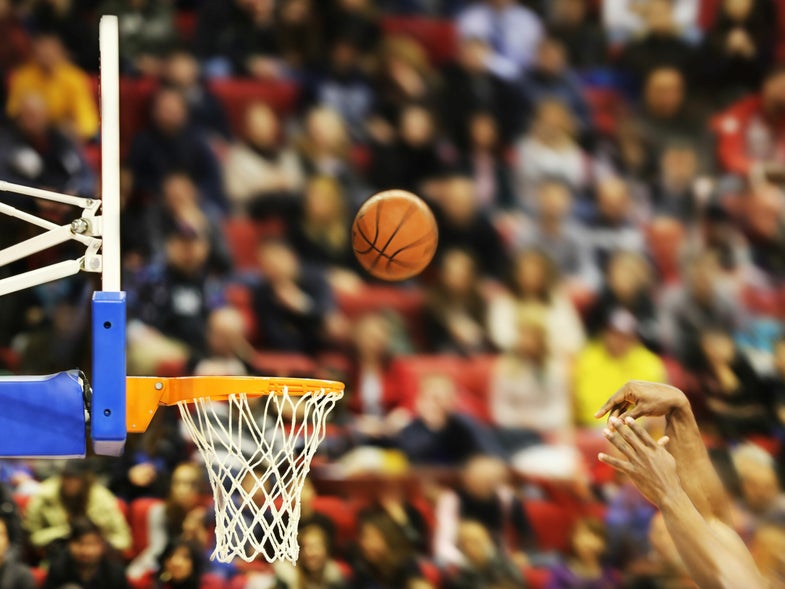 If you watch a professional basketball game closely, you'll notice that players on the same team often move in sync. Deposit Photos
SHARE

Forget highlight reels of 360-degree dunks and half-court shots, these videos of NBA players moving in sync could be the best predictor of who will win the 2018 championship.

In the mesmerizing clips, players cheer on their teammates, call out plays, jump to defend a shot, and bend down to tie their shoes—all in perfect unison. In the most popular video, five teammates on the Phoenix Suns turn and run up the court at the exact same moment, looking more like a coordinated dance routine than a game of hoops. But aside from their whimsical appeal, do these parallel movements signify anything about the teams’ performance?

Experts say the synchronized actions are no coincidence. They’re the result of deliberate training meant to foster trust and cooperation.

“Sports teams definitely do incorporate some synchronistic rituals” to help them prepare for games, says Scott Wiltermuth, an associate professor at the University of Southern California’s Marshall School of Business who researches how synchrony can boost cooperation. These exercises range from drills that train players to run up the court in-step after a basket to practicing defensive footwork in formations that resemble line dancing.

Wiltermuth says practicing to move as one could help teams be more selfless with their play. “When you have that sense of connection from synchronous activity, you’re more willing to sacrifice for the team,” he says. “In a basketball context you might see more assists. People are sacrificing their chance to score in order to give their teammates a chance.”

Pregame rituals that incorporate synchronized choreography and chants seem to be key as well. (Think of the haka dance performed by the New Zealand rugby team, ‘the All Blacks’, before games.) Delice Coffey, a psychologist and mental game coach specializing in basketball, says pregame routines that involve synchronized stretching and warm-up drills help players set a unified state of mind and reinforce that they are all striving towards the same goal. “They’re doing all these things together before the game starts, which is conditioning their minds so that when they get on the court they’re still going to function as a team,” she says.

So what’s going on in the brain during these synchronized movements? And how do they leak over from planned practice drills to spontaneous game-time decisions?

Marco Iacoboni, a psychiatrist at UCLA, says mirror neurons may be at the root of some of the synchronized behavior. These cells exist in the motor area of the brain and fire not just when we perform an action, but also after we witness someone else make a movement. Essentially, our brains mimic, as the name implies, what the other person’s brain is doing.

Iacoboni says mirror neurons are crucial in helping us interact with others. Instead of guessing what another person’s gestures mean, your mirror neurons can actually help you simulate their state of mind. Another key component, he says, is that they help to generate empathy between the two people.

Our mirror neuron response is strongest when we watch someone we are close with, such as a friend, family member, or teammate. Mirror neurons also fire more for moves that we ourselves are expert at making. One study showed that professional basketball players have greater mirror neuron activity than fans or sports writers do in response to video clips of people shooting free-throws. Taken together, it’s no surprise that basketball players would be particularly primed to mirror a movement of their teammate on the court.

Alternatively, the players could be making the same move at the same time in response to the same stimulus because they’re highly skilled professionals who have been trained to do that. When your team gets the ball after a rebound or a steal, you don’t need to look and see what your teammates are doing, you know to race up the court in the hopes of creating a fast-break opportunity.

But even this scenario indicates trust and a mental bond, Iacoboni says. “When there’s two teammates who are responding to the same event at the same time, making the same athletic gestures, that shows that there is a level of really good cohesiveness.”

It’s not just parallel movements that are important. Physical contact between players on the same team is also associated with better play. In 2010, psychologists at UC Berkeley discovered that teams that touch more frequently through high fives, chest bumps, and hugs had better records. The reason? More trust and cooperation.

Kraus says that watching bench reactions give you a good idea of what the atmosphere inside the locker room is like. He points to the Golden State Warriors—last year’s NBA champs—as having particularly exuberant sideline celebrations with lots of touching.

Synchronicity, touch, and what they represent (trust, cooperation, sacrifice, communication) are not just important for basketball. Virtually every team-based activity, from ballet to football, relies on these key aspects of teamwork. For instance, Iacoboni hypothesizes that mirror neurons would be highly active in doubles tennis, potentially helping players move in sync with their partners as well as anticipate the shots of their opponents. Similarly, Kraus speculates that there would be high levels of touch in baseball dugouts, even though on the field the sport is played more individually.

So, based on mental rather than technical skills, who’s going to win the championship this year? Of the two teams playing in the NBA finals—the Warriors and the Cleveland Cavaliers—only the Warriors are featured in the synchrony video mashups. Given this and their sideline celebrations, my money is on the Warriors as the back-to-back champions.

That theory doesn’t always work perfectly, though. The Suns, which was the only team to have synchronized movement of all five players on the court, finished the 2017 season with the worst record in the NBA. So trust in the power of mirror neurons, but don’t neglect the importance of making your shots.