It may be the naked core of an ancient planet 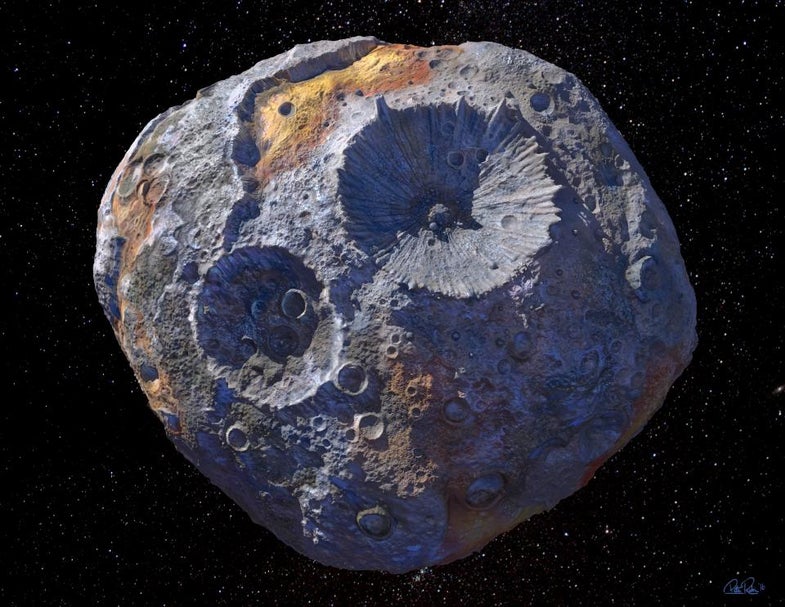 Asteroids are some of the last unexplored territories in the solar system. To help fill in some of the blanks, NASA just announced two upcoming missions that will visit new types of asteroids in the 2030s.

Launching in 2023, the Psyche spacecraft will fly into the asteroid belt between Mars and Jupiter to explore an asteroid quite unlike the balls of mud, ice, and rock we’ve studied before; “16 Psyche” is a giant hunk of metal. Measuring 130 miles in diameter, it’s thought to be made of iron and nickel.

16 Psyche may be the leftover core of a protoplanet—an infant world as large as Mars. Violent collisions are thought to have blasted away its rocky outer layers, leaving behind an asteroid very similar to Earth’s own metallic core.

The Psyche team hopes that by studying the asteroid, we can find out more about how planets form and separate into core, mantle, and crust layers.

“This is an opportunity to explore a new type of world—not one of rock or ice, but of metal,” said Psyche Principal Investigator Lindy Elkins-Tanton in a statement. “16 Psyche is the only known object of its kind in the solar system, and this is the only way humans will ever visit a core.”

If it launches on schedule, the spacecraft will reach 16 Psyche in 2030 and spend 20 months studying the giant hunk of metal.

Another mission named Lucy will launch in October 2021 to explore the Trojan asteroids orbiting Jupiter. “Because the Trojans are remnants of the primordial material that formed the outer planets, they hold vital clues to deciphering the history of the solar system,” said Harold Levison, principal investigator of the Lucy mission in a statement. “Lucy, like the human fossil for which it is named, will revolutionize the understanding of our origins.”

Both missions are relatively cheap by NASA standards, with their costs capped at around $450 million.

NASA will be holding a press conference this afternoon with more information about each mission. We’ll update this post with any juicy new details.