NASA has an unusually bold plan to find life on Europa

For the first time since the Viking mission failures, the space agency may take the direct approach 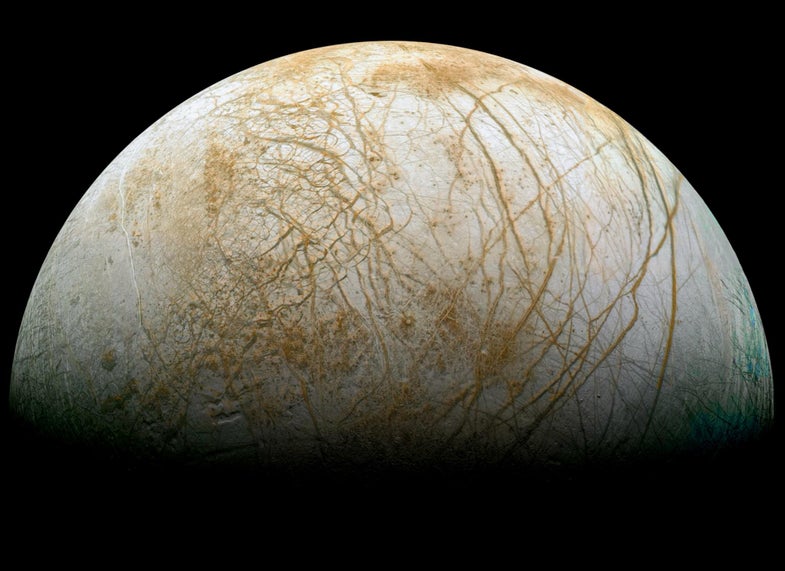 If we want to find alien life in our solar system, Jupiter’s icy moon Europa is one of the best places to look for it. And scientists may get a chance to do just that in the coming decades. A new NASA report outlines the goals for a mission that could land on the icy moon as soon as the 2031.

While the lander mission isn’t officially on the books yet, Congress wants it to happen. The new report is preliminary, meaning the goals and instruments may be subject to change. But if all goes according to plan, the mission’s primary goal would be to search for evidence of life on this frigid world.

That’s a bold move. NASA’s missions tend to look for “evidence of habitability,” or the potential of a place to support life. That’s because the last time the agency tried to look directly for alien life, it didn’t end well.

The Viking landers searched for life on Mars in the 1970s, and sent back results that are still being debated to this day. One instrument found a potential sign of life, while the other two instruments failed to find organics—and without organics, life as we know it would be impossible. A 20-year hiatus in Mars exploration followed those disappointing results.

More recently, scientists learned that perchlorate compounds in the Martian soil could have broken down any organic molecules on its surface—so Viking may have actually detected organics.

While most scientists still think there’s a low chance that the red planet supports life, the Viking brouhaha provides important lessons for astrobiologists.

“What Viking taught is us that you don’t just jump in and look for life,” says Curt Niebur, program scientist on the Europa lander mission, as well as the Europa Clipper, which will fly by the frozen moon in the 2020s. “You need a general understanding of the environment in which you’re looking, because it can complicate things.”

Below its shell of ice, Europa contains a vast inner ocean that’s thought to be in contact with its seafloor, potentially infusing the water with the energy and nutrients needed to support life. If there’s life in this deep, dark ocean, it may resemble the microbes that squirm around Earth’s seafloor and in subglacial lakes. But Europa’s surface is blasted by radiation, which can break down organic materials.

“There’s no chance that life is active on the surface of Europa,” says Niebur. “It’s a very hostile environment.”

Instead, the lander would scoop up ice samples from 10 centimeters below the surface, and analyze the contents in a variety of ways. An onboard microscope could look for visible evidence of dead microbes. Other instruments would look for organic materials, such as amino acids and lipids, that make up life as we know it. Meanwhile, determining how inorganic compounds are distributed could also hint at whether life is present.

“No singular measurement would provide sufficient evidence for the detection of life on Europa, the paper notes, “rather, the conclusion that evidence of life had been detected would require multiple lines of evidence, from different instruments…”

The report’s authors plan on using nine different sources of data, and the lander would collect and analyze five different ice samples. With any luck, the redundancy and broadness of the experiments will provide a straightforward answer to the question of whether or not Europa’s ocean harbors life.

The meaning of life

“Since Viking, we’ve better parsed the question of what it means to look for life,” Niebur says, but he thinks there’s still work to be done. The scientific community still can’t agree on a succinct definition for life, as the report notes, and in fact finding life beyond Earth would help to refine that definition. In the meantime, this is one of the big challenges the mission faces.

Two town hall meetings in March and April will give the science community a chance to comment on and discuss the report. Niebur says that one thing he hopes will come from those meetings is an agreement on what qualifies as evidence for life.

“Looking for life is not like trying to find meteorite on Mars. A lot is left to the eye of the beholder. We need to be sure the methodology we’re using is the correct one.”

Life after the search for life

The Science Definition Team that wrote the report took pains to underline that this isn’t just a mission to look for life—that it will make valuable contributions to science even if it doesn’t find alien microbes.

The lander’s secondary goal is to look for evidence of habitability. This research could reveal what conditions are like inside Europa’s mysterious ocean, and whether it has the right stuff to support to life. That tells us about the possibility of life evolving in other icy ocean worlds, such as Enceladus and Ganymede.

The mission may also give us a better estimate of how deep Europa’s ocean is, how far below the ice it’s buried, and whether there are any pockets of liquid water close to the surface.

Lastly, the mission would scope out future areas of exploration, perhaps paving the way for other craft that could drill down into the ocean to look for life in all the right places.

Although the results from Viking were mixed, the lessons scientists learned from it—as well as the technological advances of the past 30 years—are putting the Europa lander on track to provide definitive answers to some of the questions that will ultimately reveal whether life on Earth is alone in the solar system.