Mysterious double ‘whirlpools’ are popping up in the ocean

These rare masses of water may capture small critters while on the move. 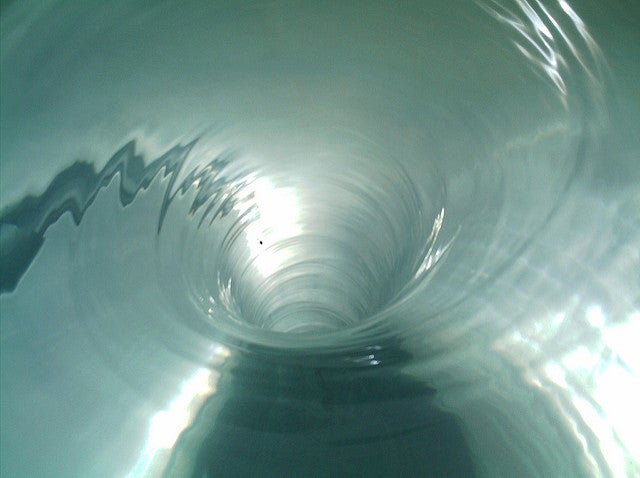 Scientists have spotted a bizarre phenomenon reeling through the southern seas: linked swirls of water that resemble giant whirlpools spinning in opposite directions.

Rotating masses of water called eddies are common in the ocean. The newly revealed pairs, however, churn through the water up to ten times faster than their single counterparts, and are connected underwater by a U-shaped vortex. What’s more, they might be able to slurp up tiny marine animals and ferry them great distances. Researchers are now trying to figure out how these maelstroms came to be and why they behave so weirdly.

Eddies, which can measure more than 60 miles across, are typically created by turbulence in larger ocean currents. “When they reach a certain strength they spontaneously start meandering and breaking up into eddies,” says Chris Hughes, an oceanographer at University of Liverpool in England and one of the scientists behind the new discovery. Eddies play an important role in the ocean by mixing water from different areas, he says. They can stir up nutrients normally found in deeper waters and transport water across gyres, patterns of circular ocean currents that can be thousands of miles wide. This is essential for transporting heat from the equator up to the waters around the poles. “That really wouldn’t be possible without the eddies,” Hughes says.

Mathematicians have proposed that eddies might be able to meet up and travel in pairs since the 1970s. And researchers have been able to create tiny versions of this phenomenon; you can even observe these vortices, which are shaped like the bottom half of a smoke ring, in a swimming pool. But until now, double eddies have never been seen in the wild. Hughes spotted one while examining satellite footage of the ocean’s surface from around the world.

“I happened to notice one little feature down in the Tasman Sea [between Australia and New Zealand] that was behaving very strangely compared to everywhere else,” Hughes says. “Almost all these eddies drift slowly westwards, but this little feature was going quickly eastwards. It turned out to be this half smoke ring.”

These smoke rings seem to be quite rare. Hughes and his colleague Peter Miller, of the Plymouth Marine Laboratory, pored over 25 years’ worth of satellite imagery and identified just eight in the waters around Australia and one off the coast of South Africa. Eddies normally travel around one mile per day in these areas; the smoke rings covered five to 10 miles per day, and lasted for about six months before splitting up.

Hughes thinks a smoke ring’s unusual speed and direction might be related to the balance between its two eddies. In each smoke ring, one eddy has a hole in the center like the one you might normally see in a whirlpool. The other has a bump of water in the middle and spins the opposite way. The dip or bump in a normal eddy creates a disturbance that pushes through the surrounding waters, constraining its speed. “If you have a pair of them together, that can cancel out,” Hughes says. “There’s no mass moving westwards like there is in a standard eddy.”

Smoke rings may be spawned when two eddies spinning in opposite directions smack into each other. Or in other cases, a single eddy may form near the coastline, where friction will slow some of the churned-up water until it begins to spin in the opposite direction. This seems to be what happens in the vicinity of the East Australian Current, although why smoke rings haven’t appeared in the many other places that have strong currents near the shore isn’t clear, Hughes says.

Aside from its cameo in Finding Nemo, the East Australian Current is famous for having different conditions than the surrounding water, including warmer temperatures. Eddies that form in that current are distinctive as well.

“If they pair up they’ll shoot across the whole of the Tasman Sea and also carry the same kinds of properties with them,” Hughes says. “You would get particular blobs of water where the biology and the conditions are totally different from the surrounding area.”

He believes the smoke rings might even capture tiny marine creatures and transport them far across the sea, while also attracting larger animals. “It’s quite possible there are shoals of particular types of fish following these eddies for their special conditions,” says Hughes, who published the findings December 4 in Geophysical Research Letters. “Fish would actually actively follow the eddies by choice because of what’s in them.”