Some musings on our favorite mycological marvels. 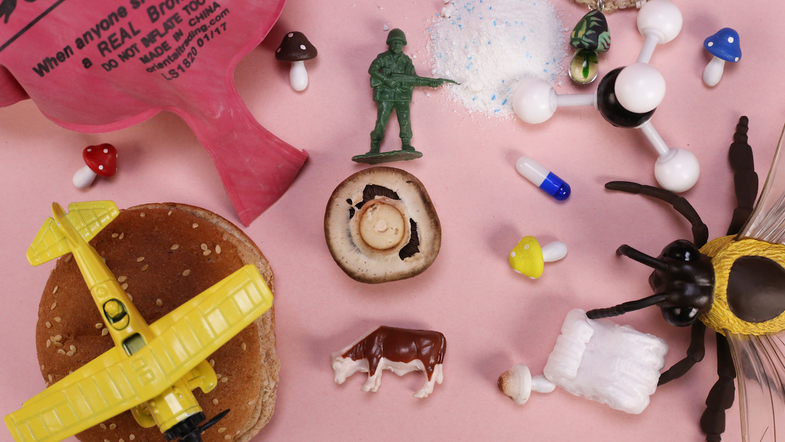 The tents were disappearing. The uniforms were, too. But the supplies didn’t vanish all at once. It was World War II and enemies were everywhere, but nothing was swiped or stolen from the U.S. campsite on the Solomon Islands.

Rather, everything in that slice of the South Pacific seemed to be disintegrating—and fast. It was as though some invisible critter had eaten its way through the military encampment and the shirts on their service members’ backs. The culprit, the Army would soon discover, was a hungry fungus, which would be named Trichoderma reesei. But it would be better known by its military alias, QM6a.

While the fungus initially gave the army a run for its money, today QM6a is prized by industry, the U.S. military included. Its ability to naturally degrade cellulose meant T. reesei caused headaches for the Solomon Islands campaign, as it munched through American cotton, wood pulp, and paper. But today it’s a primary source of cellulase, which is used to process coffee beans, transform biomass into biofuels, and more.

QM6a is far from the only fungal terror in recent human history. But it’s not the only fungi to be put to use by humans, either. Today, the enzyme industry, which is in large part based on items isolated from fungi, is worth more than $3 billion. By 2024, market analysts predict it will hit $9.5 billion.

Roy Halling is the New York Botanical Garden’s mushroom man. As curator of mycology—that’s the scientific study of the fungi family, which includes mushroom, mold, and mildew—he splits his time between the lab and the field. On a tour of the Bronx-based herbarium, which houses almost 8 million specimens, Halling told PopSci about the kingdom’s incredible capacity for rot.

“Where there’s carbon, there’s a fungus ready to degrade it,” Halling says. The proof that fungi aren’t always fun guys is in everything from medicine to agriculture. Look no further than ringworm, that itchy-scratchy skin infection that can be brought on by 40 types of fungi, or the dozens of similar illnesses that also plague humans. If that doesn’t wow you, consider the banana. Specifically, the Gros Michel banana, which was the main variety sold in the United States until the 1950s, when it fell victim to the fungal-driven Panama disease. Growers replaced it with the Cavendish banana we eat today, which just so happens to also be susceptible to Panama disease.

But in the last century or so, we’ve increasingly come to see these diverse and spore-tastic species as friends, not foes. Fungi has always helped to ferment our beer and give our sourdough its spunk. But in 1928, Alexander Fleming of St. Mary’s Hospital discovered penicillin, a world-changing antibiotic made from plain old mold. Today, some 1,600 antibiotics on the market owe their existence, in one way or another, to these little fruiting bodies. And as PopSci‘s senior multimedia producer Tom McNamara shows in his latest video “Mushrooms Might Save the World” we’re finding ways to use mushrooms as an alternative to meat, leather, and styrofoam, too. We’re also testing them as a way to treat people with PTSD and help bees fight off mites and avoid colony collapse.

But that doesn’t mean mushrooms have stopped marauding the carbon-based universe. They still use their corrosive power to consume anything and everything they encounter. It’s just that humans are getting better at harnessing that power for our own purposes.

Novozymes, a Danish biotechnology company, is using enzymes from bacteria and fungi to create more environmentally-friendly laundry detergent. Instead of relying on artificial chemicals, companies like Tide and Seventh Generation are turning to natural ingredients—wherever they can find them.

“I simply go out into the woods and forests with my mushroom basket,” says Mikako Sasa, a mycologist with Novozymes. If she finds a fungi the company hasn’t collected before, she brings a sample back to the lab. “It’s not a numbers game. It’s a diversity game,” Sasa continues. “I want to increase my diversity, because we sell so many enzymes for so many products to so many industries.”

Novozymes, which generated $2.2 billion in revenue in 2016, has found that some fungal enzymes can reduce the amount of energy that goes into a load of laundry. The enzymes require less energy to activate than lab-made chemicals, cutting down on the total carbon emissions of cleaning your clothes. Just as intriguing, however, is the discovery that fungal enzymes are great at tackling stains. Hydrolytic enzymes break chemical bonds when mixed with water. T. reesei, which ate all those Army tents in the Solomon Islands, hydrolyzes cellulose. But other fungi are specialists at breaking apart other bonds—including the bonds between blood, sweat, or dirt and your clothes.

Scientists are also researching fungal enzymes and their ability to recycle trash and remediate damaged earth. In 2011, researchers published a much-discussed paper on isolates of the rare fungus Pestalotiopsis microspora, which has a hankering for polyurethane, a durable plastic that appears in roller coaster wheels, modern art, and lots of stuff in between. Numerous studies suggest that mushrooms, which naturally absorb toxins, including heavy metals, can be used intentionally to clean polluted soils.

Ultimately, we must strike a delicate balance with our mushroom brethren. They can certainly help us reduce our carbon footprint and heal our ailing minds, but mycological history makes one thing abundantly clear: Fungi can be downright fearsome.