Mushroom-Body Drone Biodegrades Into Almost Nothing

Like dust in the wind... well most of it, anyway 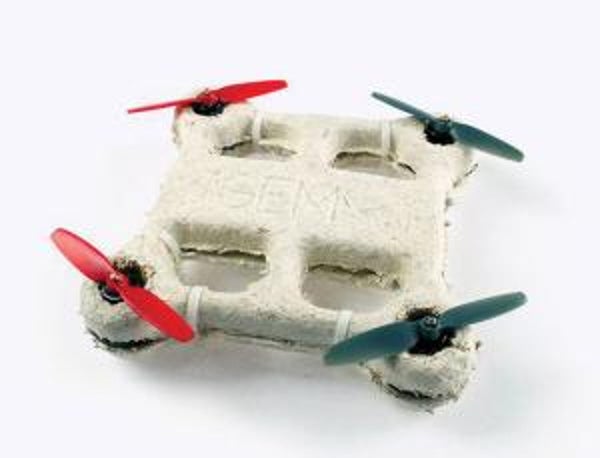 Small, cheap drones make appealing cameramen for a variety of tasks — from a research apparatus to a tourist’s plaything. Light, unmanned aircraft, especially those piloted by amateurs, pose a new danger to the environment, however. What happens if a gust of wind or pilot error sends the drone into, say, a beautiful and delicate geothermal hot spring? The bio-drone, developed by researchers at NASA’s Ames Research Center in California, is a biodegradable solution to this issue.

The bio-drone’s body is made of mycelium, a fungal mass specifically grown into this shape by New York’s Evocative Design. Mycelium is hardier than people might expect from mushroom fibers, and Evocative Design has used it for packaging and insulation. The circuits were made using silver nanoparticle ink, which can be printed on biodegradable material. If lost, a lot of the bio-drone will harmlessly decompose, rather than pollute the environment.

But not all of it will. The current bio-drone only has a biodegradable body and circuits. The motors, battery, sensors, and rotors that give the drone power and the ability to move were borrowed from a commercially-made quadcopter. Researchers hope to make the sensors biodegradable next. If lost right now, the body and the brains of the drone would break down, but its mechanical guts wouldn’t, leaving a drone skeleton in its place.