They'll protect the internet from all your dumb (sorry, smart) devices Symantec introduced a new Wi-Fi router that will protect your computers and IoT devices from online threats. Symantec
SHARE

In October 2016, an attack on Dyn DNS shut down the internet. It soon became clear that the attack was possible because of an overwhelming number of new, unsecured, internet-connected devices—the Internet of Things (IoT). This year’s Consumer Electronic’s Show has introduced us to plenty of new IoT devices, including cute robots, new capabilities for Amazon’s Alexa (despite the fact that she keeps buying things for people that they didn’t order), and even a smart hairbrush and pillow, which both sound very necessary.

Symantec, the company behind Norton AntiVirus, has come up with a unique answer to the growing IoT problem. Rather than protecting each of your devices individually, Symantec’s new wifi router (the Norton Core) will use the company’s expertise and software to protect up to 20 laptops, computers, tablets, or smartphones—and an unlimited number of IoT devices—in one fell swoop.

The router scans every packet of data that you send or receive for threats to your online security. If it detects one, it automatically quarantines infected devices and data. You’ll be able to monitor these threats, as well as all devices connected to the router, through a smartphone app. The app also allows for certain devices to be prioritized over others, ensuring those that need more bandwidth get faster internet connections. If you have kids, you can also use the router to monitor and control which websites they access. You can even tell the router to turn off internet access to certain devices—or devices linked to a particular profile—at certain times. So you can make sure little Johnny isn’t up all night watching YouTube videos on any of his devices (except for his phone, maybe, but that’s your own dang fault for getting the kid a data plan). 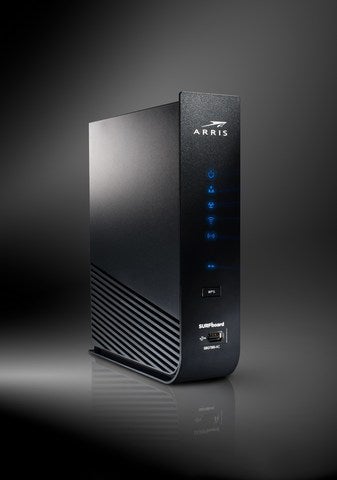 McAfee announced that its own security software will soon be available in a modem/router combination. But unlike Norton, it’s not making its own hardware. Instead, the newly-announced McAfee Secure Home Platform will come in each model of the Arris SURFboard Secure Home Gateway fleet, beginning with the ARRIS SURFboard SBG7580-AC. Rather than scanning all of your data like Symantec’s router, the ARRIS will check McAfee’s database of safe websites and warn you if you try to go to a site known for phishing. It will also offer many of the same security features and parental controls as the Norton Core, which can all be controlled via the McAfee smartphone app.

As consumer tech increasingly meshes with the internet, we need to make sure we’re securing it and protecting ourselves from hackers, botnets, and anyone else who would seek to abuse those who unknowingly use vulnerable devices. Of course, any security product carries its own potential for disaster. This past June, Google found “multiple critical vulnerabilities” in several of Symantec’s products; the flaws have since been fixed. And then there’s the associated cost. The Norton Core can be pre-ordered for $200 (the price will eventually go up to $280); after one free year, Core users will have to commit to paying an extra $120 annually (a monthly $10 fee, not including taxes) to maintain access to the security software. If they don’t pay up, they’ll be left with a regular old wifi router. The Arris router can be purchased for $210. McAfee has not yet announced how much its security software will cost in addition to the router, but plans to do so later this year.

The new Norton Core router from SYMC looks great! Will people pay $200/once + $120/year for security on top of their Internet fees? Nope!