The Month In Plagues: Pig MRSA Threat, There’s Probably No Plague On The NYC Subway, And More

Your monthly roundup of infestations, contagions, and controls from around the web: In outbreak news Measles continues to spread in... 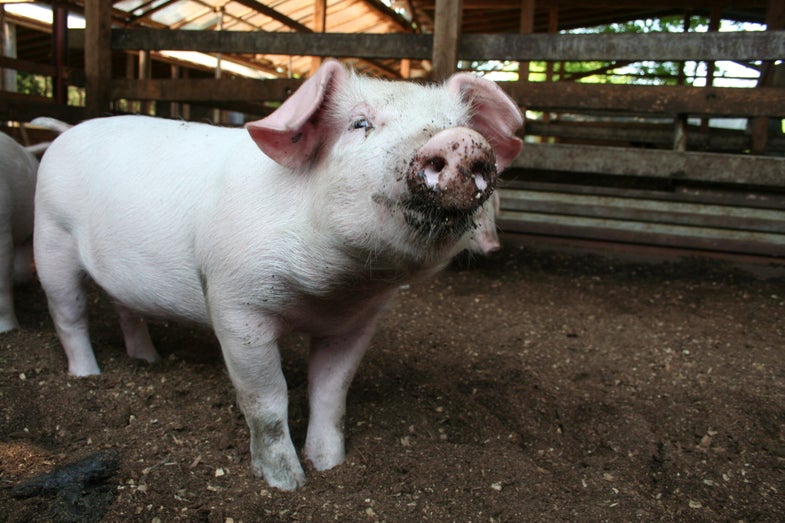 Measles continues to spread in the United States, with more than 150 cases, most of when stem from the recent Disneyland outbreak. Carl Zimmer has a nice post explaining why the virus is so contagious.

Meanwhile, there’s an outbreak in Germany, too, but as Adam Chandler at the Atlantic notes, that the country appears calmer about it despite the fact that it is around ten times worse. (Measles outbreaks are also up throughout Europe.)

The Ebola outbreak continues in West Africa. Some countries, including Liberia and Guinea, have so few new cases that clinical trials on treatments and vaccines may not have enough patients to continue. But other countries, including Sierra Leone, have seen a recent uptick. Read this great story by Amy Maxmen at Al Jazeera America on a blood trial underway in Sierra Leone, as well as this piece by Maryn McKenna at Wired that covers the current situation in Liberia.

An outbreak of the superbug CRE, aka carbapenem-resistant enterobacteriaceae, in a Los Angeles Hospital killed two patients and infected seven more. Around 180 others may have also been exposed. Still, experts say the overall risk of the outbreak is relatively low.

And new research on an old plague—specifically, the Black Death—had a lot of journalists claiming gerbils were responsible for the spread of the disease, but critics point out that is not likely the case.

The measles outbreak has turned focus on the anti-vaccine and vaccine hesitant in the US. Some reporters, like Jesse Singal at the Science of Us, argue that shaming these people won’t encourage them to vaccinate, while others, including Matt Novak at Gizmodo, say bring on the ridicule!. Related: check out Virginia Hughes at Buzzfeed on why her mom didn’t vaccinate her; NPR on how this anti-vaccine mom changed her mind; and this Karen Lowe National Geographic piece on a pro-vaccine family that still harbors vaccine fear.

A controversial story on the HPV vaccine in the Toronto Star got a lot of backlash, including criticism from the newspaper’s public editor.

And some good news: read this Verge story on a promising experimental HIV drug that may eventually give us a vaccine.

Research on phages—viruses that kill bacteria—has heated up in recent years, thanks to antibiotic resistance. Azeen Ghorayshi at Buzzfeed has a great feature exploring phage therapy. And here is an interesting piece about artificial phages from The Economist.

A research team at Harvard University has another approach to drug-resistant bacteria, at least in the hospital: stop the critters from attaching in the first place. Mary Beth Griggs at Popular Science describes a Teflon-like material that can coat catheters and surgical equipment to prevent bacterial biofilms from forming.

And the Wall Street Journal reported on a new study that claims to map the bacteria teeming in New York City’s subway system, including hints of plague and anthrax. Ed Yong points out weaknesses in the study’s methodology and says there probably isn’t plague on the subway after all.

This could have just as easily gone in the previous section: there is growing evidence that MRSA can spread from pigs to people. Read more at National Geographic.

Brandon Keim at Wired has a lengthy piece on the potential problems with the next-generation herbicide-tolerant GMOs.

And the USDA approved the first GMO apples earlier this month, although you won’t see them in stores for at least another year or two.

Researchers are using satellite data to track environmental conditions that may encourage the growth of disease-carrying snails in Africa, reports the BBC.

Here’s a neat comic explaining how invasive pythons have taken over Florida.

Finally, bed bugs—among my favorite topics!—may be breaking into a new species. They may also provide a new model for observing evolution as it happens. And you thought they were worthless.