The Month In Plagues: Chagas In The US, Polio Eradication In Nigeria, And More

Your monthly roundup of infestations, contagions, and controls from around the web: In outbreak news The few Ebola cases in... 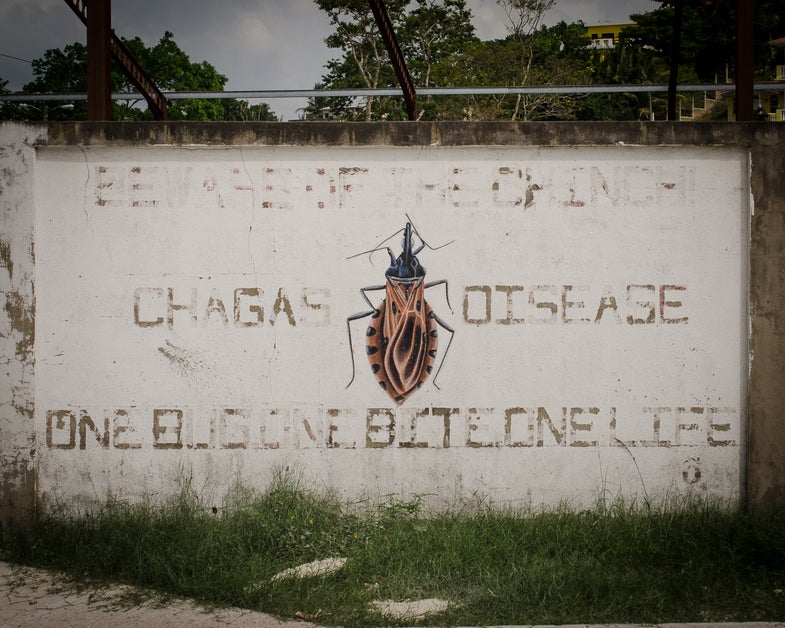 The few Ebola cases in the US officially ended, but the outbreak continues in West Africa. It has spread to Mali, which recently saw its eighth case. There have been more than 15,000 and nearly 5,500 deaths worldwide to date, and the outbreak is also affecting food supplies and non-Ebola medical care.

Meanwhile, there are other pathogenic threats that are getting ignored thanks to Ebola panic, from Chikungunya to Dengue to measles to Chagas disease, the latter of which is working its way further into the US (speaking of Chagas, recent reports suggested that bed bugs may spread it, but don’t worry quite yet.)

There is also a rare and deadly form of malaria in Malaysia.

One bit of good news, though: Nigeria has nearly eradicated polio, thanks to extensive vaccination programs.

In other microbe news

Researchers are turning to antibodies in attempts to combat antibiotic resistance.

Bird flu has been discovered on farms in Europe, although don’t worry quite yet: it is not a strain that is known to infect humans.

And Willy Burgdorfer, the medical entomologist who discovered the cause of Lyme disease in the early 1980s, has died. The New York Times has a fascinating obituary that includes the story of his discovery.

We may have the world’s first Dengue vaccine by next year.

An exchange between a doctor and a patient, recalled on Twitter and posted at the NYT Dot Earth blog, shows how we fear the wrong things (for example, fearing Ebola rather than seasonal flu, which is more likely to kill you in the US).

Speaking of an Ebola vaccine, researchers are working on it and trials are scheduled to start soon, although there may be complications on the ground.

And speaking of the flu shot, if you’ve ever wondered what’s inside it, look no further than this Wired explainer.

The largest meta-analysis on GMOs to date suggests that the technology has had widespread benefits.

The USDA approved a genetically-modified potato, engineered to produce lower levels of acrylamide, a possible carcinogen (although the jury is still out on that.

Maui voted to ban GMO farming altogether, which poses a problem for all related research.

And Toshiba is using high-tech clean rooms to grow vegetables, which forgo pesticides and aren’t exposed to disease or pests (still, I wonder about the energy costs).

Homeowners who can’t tame Japanese knotweed in their yards may face fines and “an anti-social behavior order,” a penalty I personally haven’t heard of before with respect to invasive species control.

Check out this video of a crazy-big swarm of lion fish off the coast of Florida.

The Conservation tackles the question: Which is the world’s deadliest spider, really?

And finally, it’s an old New York legend that there are as many pathogen-carrying-rats in the city as there are people. New statistical analysis suggests the number is much smaller (2 million rats as opposed to 8 million).

But still. That’s a lot of rats, right?