Scientists measure methane at the source 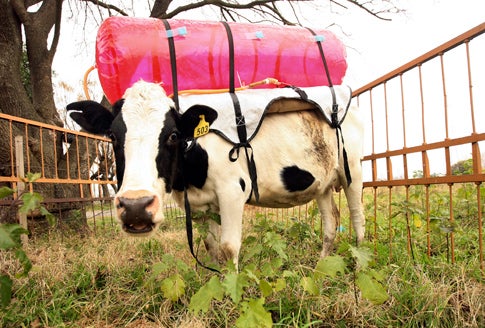 In a lush pasture near Buenos Aires, this cow and its compatriots are digesting important information: how much methane—a greenhouse gas 20 times as potent as carbon dioxide—is released by the country’s 55 million bovines. Researchers from Argentina’s National Institute of Agricultural Technology connected inflatable tanks to the cows’ first stomach, where methane is made, through a small hole between their ribs.

By measuring methane production directly inside each cow, biologist Silvia Valtorta hopes to more accurately determine the country’s overall agricultural contribution to global warming. According to the data, an average cow releases more than 70 gallons of the stuff every day. But a change in diet could reduce that. Cows that eat mostly grain produce 20 to 25 percent less methane than grazing cows, and adding tannin—a bitter chemical found in wine—to the feed could lower it further.