Mini-Brains Could Help Scientists Understand How Chemicals Affect The Brain

And they might help evaluate new drugs better than animal models 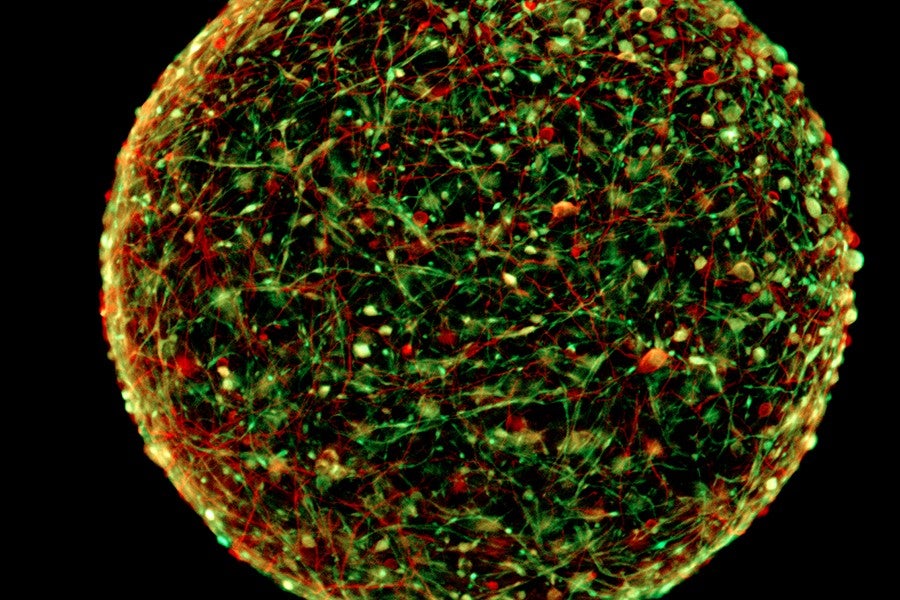 Researchers often rely on animal models like mice to evaluate how new drugs will affect the human brain or to better understand how the brain functions. But in recent years, scientists have turned to “mini-brains”—tiny lab-grown balls of brain cells—to test pharmaceuticals or better understand the causes of some diseases. While many of these brains are sophisticated enough to mimic the structure of the human brain, they also have limitations: They take several months to grow, and each one varies slightly, which inhibits researchers from getting rapid, consistent results from their experiments.

Now, researchers at the Johns Hopkins Bloomberg School of Public Health have developed a technique for making mini-brains more quickly and consistently, which they believe could allow mini-brains to replace animal testing for a variety of experiments. Dr. Thomas Hartung, a professor of environmental health sciences and one of the researchers behind the project, presented the work on Saturday at the annual meeting of the American Association for the Advancement of Science (AAAS) in Washington, D.C.

Like other mini-brains, these are made from pluripotent stem cells—ones capable of producing any cell or tissue the body may need—that have been isolated from skin. But while others are isolated to a single plane (or as Hartung describes it, “like pan-fried eggs sunny side up”), the cells in these mini-brains are kept suspended by being constantly shaken as they develop. After eight weeks, the mini-brains were each just 350 micrometers in diameter but when hooked up to an EEG, they showed activity—indicating to the researchers that the cells were working together as they would in a real brain. And while the initial batches contain 800 mini-brains each, Hartung believes the system could expand to grow thousands per batch.

Identical mini-brains meant to mimic healthy brains would be useful for testing the effects of environmental pollutants or pharmaceuticals, Hartung says. In the past, animals like mice and dogs have been the standard model to evaluate drugs before they are tried in humans but Hartung believes that consistent human cells can do better.

“When testing drugs, it is imperative that the cells being studied are as similar as possible to ensure the most comparable and accurate results,” he says. The technique could also be used to create mini-brains to better understand how brain cells work together in people with conditions that can’t be fully explained by genetics, like autism and Alzheimer’s. They could even help researchers better understand the relationship between the Zika virus and microcephaly, the birth defect associated with the viral infection.

Hartung admits that these mini-brains can’t totally replace animal models, which are better able to demonstrate how a drug will affect the entire organism. The researchers recently founded a company called ORGANOME to put the mini-brains on the market. They didn’t estimate how much each one would cost, but they hope to make them available to researchers by the end of this year.