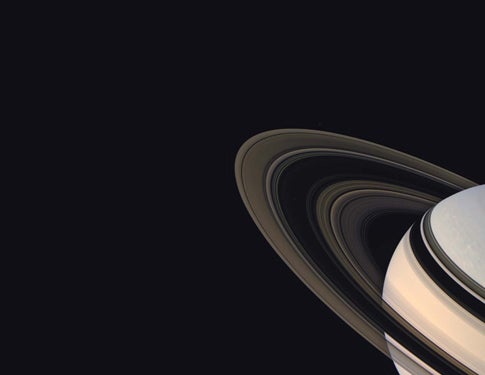 The 14-year-long summer on Saturn’s southern side is drawing to a close. August 11, 2009, marks the planet’s vernal equinox, when Saturn’s thin rings line up edge-on with the sun. As this happens, the rings will appear to grow thinner until they completely vanish. Because scattered sunlight won’t obscure the view, it’s a perfect time for NASA’s spacecraft Cassini to answer long-standing questions about Saturn.

What are the rings?
As the sun shines on the rings’ upper surface, temperatures there will rise an estimated 54oF. Cassini’s infrared spectrometer could help uncover the composition of the rings’ particles and explain their red hue.

Where did they originate?
Saturn’s rings actually have waves, some of which look like the corrugations of a metal roof. As the sun shines face-on to the rings, the waves will cast shadows across their irregularities, helping scientists to understand their origins.

What shape are they?
Light from the planet reflected onto the rings, called Saturn shine, will appear stronger, lighting up the rings like a floodlight. By comparing previous observations with those free of the sun’s glare, astronomers will better study the rings’ structure.