Is There Ice On Mars? Apparently So

The Phoenix Lander has uncovered what it was sent to look for -- water ice! NASA's follow-up mission hopes to uncover a team of little green hockey players 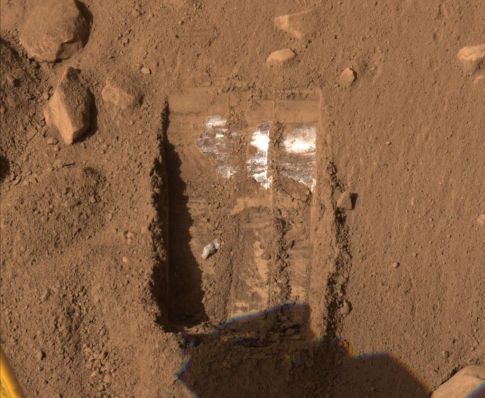 NASA spent $420 million to send the Phoenix Lander to Mars last year. Festooned with state-of-the-art detection equipment, the rover’s task was to scour the red surface in search of elusive Martian ice. And today, the NASA mission finally did uncover some extraterrestrial frost, and it did it with its simplest tool, a shovel.

The rover was digging a trench nicknamed Dodo-Goldilocks with its robotic arm when it hit some hard, refelective material. The scientists back on Earth who control Phoenix halted the digging, and spent the next couple of days taking photographs of the hole, trying to figure out what they were looking at in the ditch. Was the whitish material a kind of salt? But over those days of photography and scrutiny, something interesting happened to the marble-sized chunks. They evaporated. Long entombed beneath the iron-oxide surface of the red planet, the substance turns out to be part of a frozen layer of water just below the ground covered by Phoenix.

Any time water is discovered on other planets, the scientific community pays attention. Vital for life, the presence of any form of water immediately raises the chances that biological material might be present as well.

Currently, Mission Control is taking another look at a different trench, where the lander struck a hard layer at the same depth as the newly discovered ice. With any luck, that layer is composed of the same frozen treasure Phoenix unearthed today.