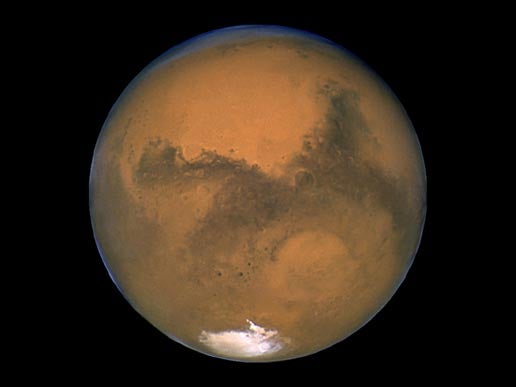 A couple of days ago, it was big news when ice was found on Mars. Now, an upcoming study in the journal Geochimica et Cosmochimica Acta claims that the Martian environment was once wet enough to produce morning dew. This finding runs counter to the more widely accepted view that liquid water on Mars seeped up from the ground, rather than falling from the sky as precipitation.

While the Phoenix rover is getting all of the press these days, the new study actually used records from older probes like Viking, Pathfinder and Opportunity. The study’s authors looked at data collected between 1976 and 2006 at different locations on Mars. In the various samples the researchers looked at, the soil had been depleted of elements that should have been present at the formation of the particular rock types. The absence of those elements indicates that water washed out the soil while moving downward. In contrast, had the water rose through the surface as previously thought, the soil would have been enriched with minerals from lower levels of rock.

The always important subtext to discoveries of extraterrestrial water is the knowledge that where there is water, there is life. By introducing the possibility of rain to Mars, the study shows that the planet could have been wet far more recently than previously believed; that longer wet period would have provided more time for some form of organic material to develop. And while there is still no proof that there is or was life on Mars, at the rate scientists are discovering water, we may want to rethink the whole “Red Planet” moniker.