The miracle of life—520 light-years away

At this moment, in the constellation Taurus, a planet is forming in the dust and debris surrounding the star HL Tau. The protoplanet, named HL Tau b, may be the youngest yet discovered. 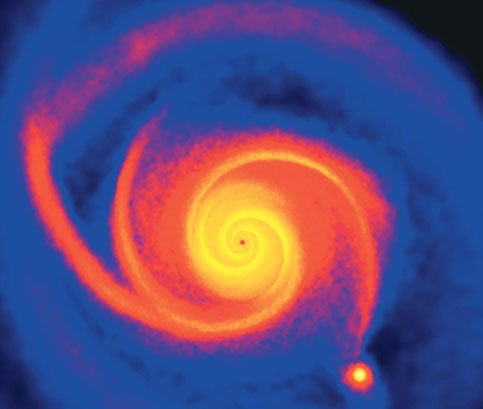 Childhood’s End: The bright spot at the lower right is a developing planet

A team of British astronomers found HL Tau b when they noticed an extra-bright clump in a radio image of its parent star from the Very Large Array radio telescopes at the National Radio Astronomy Observatory in New Mexico. The young planet is believed to be only a few hundred thousand years old and 930 million miles in diameter. Because its parent star is still developing, the protoplanet won’t condense into its final form—a ball of hydrogen and helium gas about the size of Jupiter called a gas giant—for at least another million years, says astronomer Anita Richards, a member of the research team. Further observations will help scientists learn how gas giants like Jupiter and Saturn formed in our own outer solar system.